Even before COVID-19, the federal government's long-term fiscal path was unsustainable because debt was growing faster than the economy. By the end of FY 2019, debt held by the public had climbed to 79% of GDP. It is expected to reach 195% of GDP by FY 2050.

We testified that the federal government does not have a long-term fiscal plan to control the growing debt. Such a plan could benefit from fiscal rules and targets, as well as an alternative approach to the debt limit. Federal agencies can also contribute to the nation's fiscal health through things like reducing the tax gap—i.e., the difference between taxes owed and taxes paid.

Federal Debt Held by the Public

The federal government faced an unsustainable long-term fiscal path—even before complications resulting from COVID-19—caused by an imbalance between revenue and spending built into the structure of current law. Congress and the administration have taken necessary actions—which totaled $2.6 trillion—to respond to COVID-19 and the resulting severe economic downturn. Once public health goals have been attained and the economy has substantially recovered, Congress and the administration should swiftly implement a broad plan to address the long-term fiscal outlook.

This plan could benefit from the inclusion of fiscal rules and targets, which guide fiscal policy by controlling factors like expenditures, revenue, or the ratio of debt to gross domestic product, as well as from an alternative approach to the debt limit.

The nation also faces impending fiscal pressures for major programs, which add to the need for action (see figure). 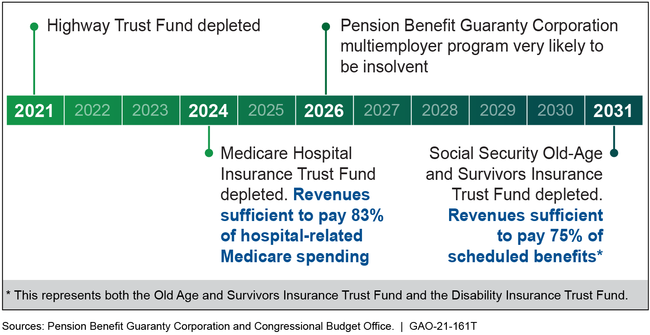 By the end of fiscal year 2019, debt held by the public had climbed to 79 percent of GDP. The Congressional Budget Office (CBO) projects debt to reach 107 percent of GDP by 2023, its highest point in history. In addition, CBO projects that annual deficits will exceed $1 trillion in each of the next 10 years.

As currently structured, the federal debt limit is not a control on debt, but a legal limit on the total amount of federal debt that can be outstanding at one time. It restricts the Department of the Treasury's (Treasury) authority to borrow to finance fiscal decisions that have already been made. Uncertainty around the debt limit increases borrowing costs and decreases demand for Treasury securities, among other things.

This statement is based upon GAO's September 2020 report on fiscal rules and targets, and GAO's March 2020 annual report on the nation's fiscal health. GAO updated certain information with new data from CBO and others.

GAO has previously suggested that Congress (1) establish a long-term plan that includes fiscal rules and targets and (2) consider alternative approaches to the debt limit.