Since 1995, the Department of Defense's financial management has been on our High Risk List. Thousands of audit findings from DOD's department-wide financial statement audits in 2018 show the extent of improvements needed. Our 2017 recommendation prompted DOD to develop a centralized database that uses real-time data to track audit findings and its progress in addressing them.

However, some of the data used to report on DOD's progress is inaccurate and incomplete. We made 5 recommendations, including that DOD improve the quality of its corrective action plans to address audit findings and its database information used to report progress. 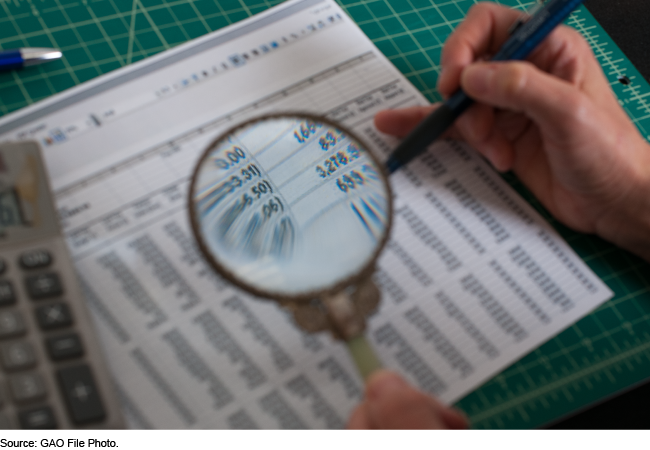 The Department of Defense (DOD) continues to face financial management issues and challenges that have prevented it from obtaining a clean audit opinion on the fair presentation of its financial statements. Specifically, financial statement auditors issued disclaimers of opinion on DOD's and the military services' fiscal year 2018 and 2019 financial statements. These disclaimers resulted from numerous material weaknesses based on thousands of notices of findings and recommendations (NFR) that the auditors issued. Of the 2,409 NFRs issued to DOD and its components in fiscal year 2018, DOD's auditors were able to close 623 (26 percent) in fiscal year 2019; the remaining 1,786 (74 percent) remained open. These results provide useful insights on DOD's remediation progress since beginning department-wide full audits in fiscal year 2018; it is important for DOD to equal or exceed this progress in the future.

Financial statement audits have value beyond the audit opinion and can help management save resources and improve military readiness. DOD leadership identified a number of benefits that resulted from these financial statement audits. For example, the Navy identified a warehouse that was not in its property records that contained approximately $126 million in aircraft parts. The Navy was able to fill over $20 million in open orders for these parts. By using these parts, aircraft were repaired quicker and made available for use, which improved military readiness. To help guide and prioritize department-wide efforts, DOD identified eight audit remediation priority areas (four in 2019 and four in 2020), seven of which specifically related to material weaknesses that its auditor reported. The military services also developed methodologies to prioritize NFRs and determined that over half of their fiscal year 2018 NFRs are high priority and significant to their financial statement audits.

DOD and its components have taken steps to develop corrective action plans (CAP) to address NFRs. However, most of the CAPs that GAO tested did not include at least one data element or evidence that a root-cause analysis was performed, as directed by Office of Management and Budget (OMB) and other related guidance, in part, because DOD guidance and monitoring efforts did not clearly identify the need for such documentation. As a result, DOD and its components may lack sufficient information and assurance that their remediation efforts will resolve the underlying causes associated with the NFRs and related material weaknesses. Based on these issues, DOD and its components are at increased risk that their actions may not effectively address identified deficiencies in a timely manner.

DOD developed an NFR Database that contains useful information on deficiencies that financial auditors identified and actions to address them, which has improved its ability to monitor and report on audit remediation efforts using dashboard reports based on real-time data contained in the database. However, certain database information on which these reports are based may not be accurate, reliable, and complete. For example, although DOD reviews NFR Database information monthly, it does not follow up on instances of outdated information or other exceptions identified to ensure components resolve them timely. Without complete and reliable information on DOD's audit remediation efforts, internal and external stakeholders may not have quality information to effectively monitor and measure DOD's progress.

This report, developed in connection with fulfilling GAO's mandate to audit the U.S. government's consolidated financial statements, examines the (1) actions taken by DOD and the military services to prioritize financial statement audit findings; (2) extent to which DOD and its components developed CAPs to address audit findings in accordance with OMB, DOD, and other guidance; and (3) extent to which DOD improved its ability to monitor and report on audit remediation efforts.

GAO reviewed documentation and interviewed officials about DOD's and the military services' audit remediation prioritization, monitoring, and reporting. GAO selected a generalizable sample of 98 NFRs to determine whether CAPs to address them were developed according to established guidance.