Immigration and Customs Enforcement contracts and agreements have increasingly guaranteed minimum payments to detention facility contractors—paying for beds regardless of use. ICE spent $20.5 million in May 2020 for over 12,000 unused beds a day, on average.

In most recent contracts, ICE has not documented its need for new space or followed other portions of its own process for obtaining it.

The ICE officers who oversee contracts in 8 of 12 field offices where we conducted interviews said office management hindered their ability to independently and effectively oversee detention contracts.

We recommended oversight revisions and more. 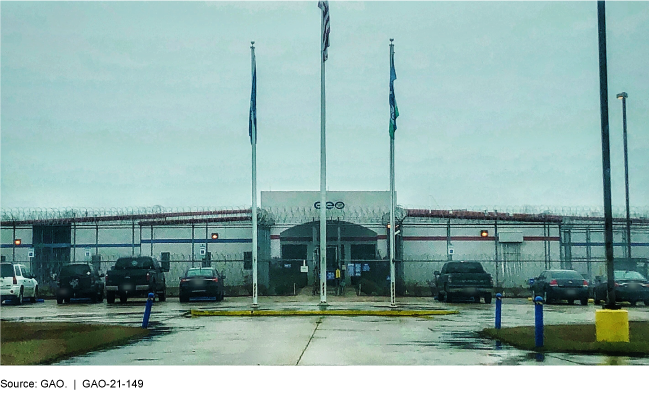 In fiscal year 2019, U.S. Immigration and Customs Enforcement (ICE) had detention contracts or agreements with 233 facilities, 185 of which it used to hold detainees, as shown below.

ICE has a process for obtaining new detention space, but it did not follow this process for most of its recent acquisitions and does not have a strategic approach to using guaranteed minimum payments in its detention contracts and agreements. From fiscal year 2017 through May 11, 2020, ICE entered into 40 contracts and agreements for new detention space. GAO's review of ICE's documentation found that 28 of 40 of these contracts and agreements did not have documentation from ICE field offices showing a need for the space, outreach to local officials, or the basis for ICE's decisions to enter into them, as required by ICE's process. Until ICE consistently uses its process, it will not have reasonable assurance that it is making cost-effective decisions that best meet its operational needs. ICE has increasingly incorporated guaranteed minimum payments into its contracts and agreements, whereby ICE agrees to pay detention facility operators for a fixed number of detention beds regardless of whether it uses them. However, ICE has not taken a strategic approach to these decisions and has spent millions of dollars a month on unused detention space. Planning for detention space needs can be challenging, according to ICE officials, because the agency must respond to factors that are dynamic and difficult to predict. A strategic approach to using guaranteed minimums could help position ICE to balance these factors and make more effective use of federal funds.

The Department of Homeland Security's ICE detained approximately 48,500 foreign nationals a day, on average, for 72 hours or more in fiscal year 2019. ICE was appropriated about $3.14 billion in fiscal year 2020 to operate the immigration detention system. ICE has three ways of acquiring detention space—IGSAs with state or local government entities; agreements with Department of Justice U.S. Marshals Service to join an existing contract or agreement (known as a “rider”); or contracts.

This report examines (1) what data show about the characteristics of contracts and agreements; (2) the extent to which ICE developed and implemented processes and a strategic approach to acquire space; and (3) the extent to which ICE has overseen and enforced contracts and agreements. GAO reviewed documentation of acquisition and oversight efforts at facilities used to hold detainees for 72 hours or more; analyzed ICE data for the last 3 fiscal years—2017 through 2019; conducted site visits to new and long-standing detention facilities; and interviewed ICE officials.