GPS may seem like everyday technology, but it depends on military systems that continue to evolve to meet defense needs. The Department of Defense has worked for decades to develop a jam-resistant GPS capability for the military called M-code. This requires satellites to broadcast the M-code signal, control systems on the ground, and equipment that can receive it.

Modernized satellites are in space but receiver equipment needed for weapons systems to make use of the signal is delayed, in some cases by years, causing ripple effects. Due to receiver delays, for example, DOD is no longer planning to use this technology in some new aircraft. 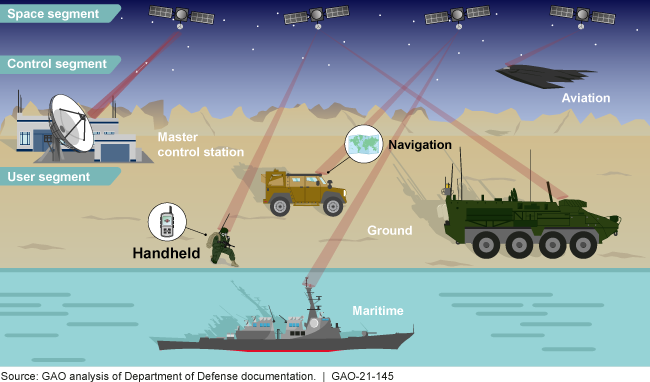 The Department of Defense (DOD) is closer to being able to use military code (M-code)—a stronger, more secure signal for the Global Positioning System (GPS) designed to meet military needs. However, due to the complexity of the technology, M-code remains years away from being widely fielded across DOD. M-code-capable receiver equipment includes different components, and the development and manufacture of each is key to the modernization effort. These include:

the next generation of GPS receivers capable of using M-code signals from GPS satellites.

DOD will need to integrate all of these components into different types of weapon systems (see figure for notional depiction of integration for one system). Integration across DOD will be a considerable effort involving hundreds of different weapon systems, including some with complex and unique integration needs or configurations.

The Air Force is almost finished—approximately one year behind schedule—developing and testing one M-code card for testing on the Marine Corps Joint Light Tactical Vehicle and the Army Stryker vehicle. However, one card intended for use in aircraft and ships is significantly delayed and missed key program deadlines. The Air Force is revising its schedule for testing this card.

The M-code card development delays have had ripple effects on GPS receiver modernization efforts and the weapon systems that intend to use them. For example, an Air Force receiver modernization effort that depends on the new technology will likely breach its schedule and incur additional costs because of the delay. In turn, DOD planned to incorporate that receiver into its F/A-18 fighter aircraft, AV-8B strike aircraft, and the MH-53E helicopter, but it no longer plans to do so because of the delay. DOD has not yet determined the full extent of the development effort to widely integrate and field M-code receivers across the department. The amount of additional development and integration work is expected to vary for each weapon system and could range from a few weeks to several years. DOD is taking steps to enable fielding modernized receivers that use M-code cards by working to identify integration and production challenges.

DOD has been developing the capability to use its more jam-resistant military-specific GPS signal for 2 decades. The Air Force launched the first GPS satellite capable of broadcasting the M-code signal in 2005, but is only now completing development of the software and other equipment needed to use it. The GPS modernization effort spans DOD and the military services, but an Air Force program office is developing M-code cards for eventual production and integration into weapon systems.

The National Defense Authorization Act for Fiscal Year 2016 included a provision that the Air Force provide quarterly reports to GAO on next-generation GPS acquisition programs, and that GAO brief congressional defense committees. Since 2016, GAO has provided briefings and reported on various aspects of GPS. This report discusses DOD's progress and challenges (1) developing M-code receiver cards, and (2) developing receivers and taking other steps to make M-code-capable receivers available for fielding.