Noncitizens apprehended by DHS may be removed from the U.S. without an immigration hearing unless they express 1) an intent to apply for asylum, or 2) a fear of persecution or torture. DHS determines whether such "fear claims" are credible; those with positive determinations have immigration hearings. DHS and the Justice Department piloted programs from Oct. 2019 to Mar. 2020 to process these claims faster.

DHS processed 5,290 people under the pilots; most claims were denied. But the agencies couldn't account for the status of immigration hearings for 630 of about 1,210 people with positive determinations. We recommended better case tracking. 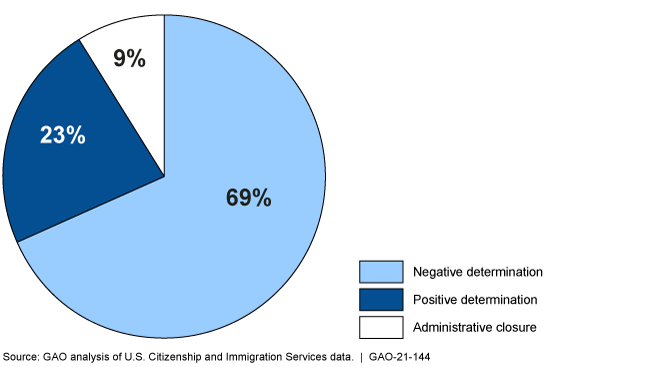 From October 2019 to March 2020, the Department of Homeland Security (DHS), in coordination with the Department of Justice's (DOJ) Executive Office for Immigration Review (EOIR), implemented expedited fear screening pilot programs. Under the Prompt Asylum Claim Review (for non-Mexican nationals) and Humanitarian Asylum Review Process (for Mexican nationals), DHS sought to complete the fear screening process for certain individuals within 5 to 7 days of their apprehension. To help expedite the process, these individuals remained in U.S. Customs and Border Protection (CBP) custody during the pendency of their screenings rather than being transferred to U.S. Immigration and Customs Enforcement (ICE). From October through December 2019, DHS implemented the programs in the El Paso, Texas, sector and expanded them to nearly all other southwest border sectors before pausing them in March 2020 due to COVID-19.

DHS data indicate that CBP identified approximately 5,290 individuals who were eligible for screening under the pilot programs. About 20 percent of individuals were in CBP custody for 7 or fewer days; CBP held about 86 percent of individuals for 20 or fewer days. Various factors affect time in CBP custody such as ICE's ability to coordinate removal flights. U.S. Citizenship and Immigration Services (USCIS) data indicate that the majority of individuals (about 3,620) received negative fear determinations from asylum officers (see figure). About 1,220 individuals received positive credible fear determinations placing them into full removal proceedings where they may apply for various forms of protection such as asylum. However, as of October 2020, DHS and EOIR could not account for the status of such proceedings for about 630 of these individuals because EOIR's data system does not indicate that a Notice to Appear—a document indicating someone was placed into full removal proceedings before an immigration judge—has been filed and entered into the system, as required. Specifically, DHS and EOIR officials could not determine whether DHS components had filed the notices for these cases with EOIR, nor could they determine if EOIR staff had received but not yet entered some notices into EOIR's data system, per EOIR policy. Ensuring that DHS components file Notices to Appear with EOIR and that EOIR staff enter them into EOIR's data system in a timely manner, as required, would help ensure that removal proceedings move forward for these individuals.

Outcomes of Screenings Under Expedited Fear Screening Pilot Programs, October 2019 through March 2020 (as of August 11, 2020)

Note: Percentages do not total 100 due to rounding.

Individuals apprehended by DHS and placed into expedited removal proceedings are to be removed from the U.S. without a hearing in immigration court unless they indicate a fear of persecution or torture, a fear of return to their country, or express an intent to apply for asylum. Asylum officers conduct such “fear screenings,” and EOIR immigration judges may review negative USCIS determinations. In October 2019, DHS and DOJ initiated two pilot programs to further expedite fear screenings for certain apprehended noncitizens.

GAO was asked to review DHS's and DOJ's management of these pilot programs. This report examines (1) actions DHS and EOIR took to implement and expand the programs along the southwest border, and (2) what the agencies' data indicate about the outcomes of individuals' screenings and any gaps in such data. GAO analyzed CBP, USCIS, EOIR, and ICE data on all individuals processed under the programs from October 2019 to March 2020; interviewed relevant headquarters and field officials; and visited El Paso, Texas—the first pilot location.

GAO is making two recommendations, including that DHS ensure components file Notices to Appear with EOIR for all those who received positive determinations under the programs, and that EOIR ensure staff enter all such notices in a timely manner, as required, into EOIR's case management system. DHS concurred and DOJ did not concur. GAO continues to believe the recommendation is warranted.