An executive order directed the Department of Homeland Security to plan, design, and construct additional barriers along the southwest border in Jan. 2017. Private landowners own a portion of the land that the government needs to construct the barriers. The government purchases pieces of land from willing sellers, or, if that's not possible, acquires the land through a judicial process.

The government is working to acquire about 5,275 acres of privately owned land, mostly in south Texas. However, factors unique to south Texas—such as old land record systems and complicated negotiations over barrier placement—have slowed land acquisition. 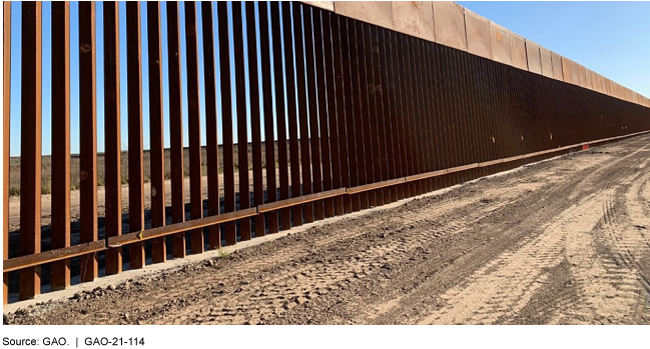 The interagency process for acquiring private land for border barrier construction along the southwest border involves the Department of Homeland Security's U.S. Border Patrol and the Department of Defense's U.S. Army Corps of Engineers (USACE) as well as the Department of Justice. The key acquisition steps are (1) identifying the landowners affected by planned barriers, (2) contacting landowners to obtain access to their property for surveying and other due diligence activities, (3) negotiating with landowners, and (4) concluding the acquisition preferably through negotiated purchase or via condemnation. The government may acquire temporary access to or permanent ownership of property by initiating a condemnation proceeding in federal district court. In this judicial process, the government articulates the public use necessitating the acquisition and the estimated compensation for the landowner, among other things.

GAO's analysis of USACE data shows that, as of July 2020, the federal government acquired 135 private tracts, or sections, of land and is working to acquire 991 additional tracts. The privately owned land the government acquired or is working to acquire totals about 5,275 acres or 8.2 square miles, and most of it—1,090 of 1,126 tracts—is in south Texas. The Border Patrol planned for private land acquisition in south Texas to take 21 to 30 months compared with 12 months for comparable land acquisitions in other regions. Border Patrol estimated private land acquisition in south Texas would take more time due to factors unique to south Texas, including:

Barrier placement in south Texas. Additional time is needed for the government to work with landowners to ensure that they have access to and are justly compensated for any negative impact on the value of remaining property between the border barrier and the Rio Grande River, according to Border Patrol officials.

Missing or incomplete land records. Border Patrol officials said that it often takes time to identify parties with interest in a tract of land due to missing or incomplete land records. In cases where the government is unable to identify interested parties, the government has to use the condemnation process to resolve title issues and acquire ownership.

In January 2017, the President issued Executive Order 13767, which directed the Secretary of Homeland Security to immediately plan, design, and construct a wall or other physical barriers along the southwest border. These new barriers would add to or replace 654 miles of primary pedestrian and vehicular barriers constructed as of fiscal year 2015. Of the nearly 2,000-mile southwest border, roughly 30 percent is federal land. Private, tribal, and state-owned land constitutes the remaining 70 percent of the border.