Over the past few years, the Department of Defense has been updating how it develops and acquires software for its weapon and business IT systems. It established a software acquisition pathway emphasizing rapid delivery and user engagement, for example, through Agile software development.

Some DOD programs, such as the F-35, have started acquiring software via the new pathway. But DOD has yet to collect the data and develop tools it needs to oversee programs using the pathway.

We recommended, among other things, that DOD automate data collection efforts for the new pathway to allow stakeholders to monitor and assess acquisition performance. 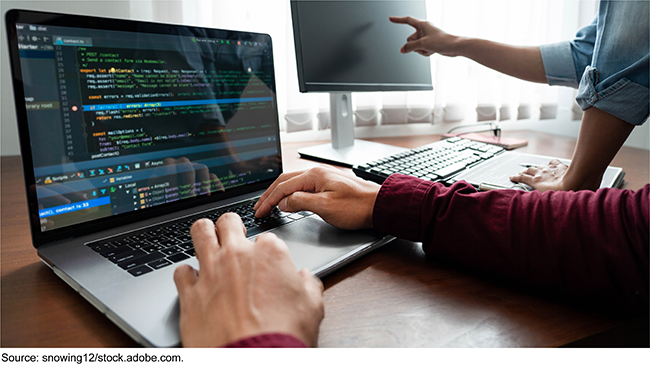 The Department of Defense (DOD) increasingly relies on software to operate its weapon and business information technology (IT) systems. Yet, DOD has long faced challenges with software development. Over the past several years, DOD made efforts to modernize its software development approaches. For example:

New software acquisition pathway. As GAO reported in June 2021, DOD created a new acquisition framework in January 2020 with six acquisition pathways, including one for software. The pathway emphasized modern software development practices, such as encouraging more frequent user feedback, as GAO recommended in March 2019. In June 2021, GAO reported that, while DOD had recently started implementing this pathway, the department did not have a data collection strategy for it. As a result, we recommended that DOD automate data collection efforts for the pathway. DOD concurred with the recommendation.

However, GAO's recent work—including the June 2021 assessments of DOD's weapon and business IT systems—shows that many programs have yet to implement certain recommended practices associated with modern software development approaches. For example, GAO's Agile Assessment Guide emphasizes the early and continuous delivery of working software to users, and industry recommends delivery as frequently as every 2 weeks for Agile programs. Yet, as of June 2021, only six of 36 weapon programs that reported using Agile also reported delivering software to users in less than 3 months.

DOD programs also reported a number of other challenges that could affect their ability to implement reforms. For example, over half of the weapon systems and nearly all major business IT programs GAO reviewed reported staffing challenges related to software development, such as difficulty hiring government and contractor staff.

GAO reported in June 2021 that DOD planned to invest over $1.8 trillion to acquire its costliest new weapon systems. DOD is also investing billions more in IT systems and capabilities.

The William M. (Mac) Thornberry National Defense Authorization Act for Fiscal Year 2021 included a provision for GAO to brief congressional defense committees on DOD's implementation of software acquisition reforms for certain systems and activities. This report summarizes past GAO findings about the extent to which DOD implemented required or recommended software acquisition reforms for weapon and business systems. Other elements of the provision will be addressed in future work.

For this report, GAO reviewed its June 2021 assessments of DOD weapon and major business IT systems, as well as other relevant prior work. GAO also identified software acquisition reforms initiated in response to recent statutory mandates. No new audit work was conducted for this report.

In June 2021, GAO recommended that DOD automate data collection efforts for the software acquisition pathway. DOD concurred with the recommendation and reported that it is developing plans for automation of data collection.