The U.S. commercial space transportation industry continues to evolve. More launches are putting more satellites and other payloads into space, and companies are edging closer to offering space tourism.

FAA's Office of Commercial Space Transportation (AST) is responsible for regulating and promoting this industry. This testimony gives an update on AST's progress in adapting to industry change.

For example, AST has streamlined rules for applicants seeking launch and reentry licenses but has not yet begun to revise other regulations. AST has also taken steps to more strategically plan for future workforce needs, as we recommended in 2019.

An FAA-Licensed launch carrying cargo to the International Space Station 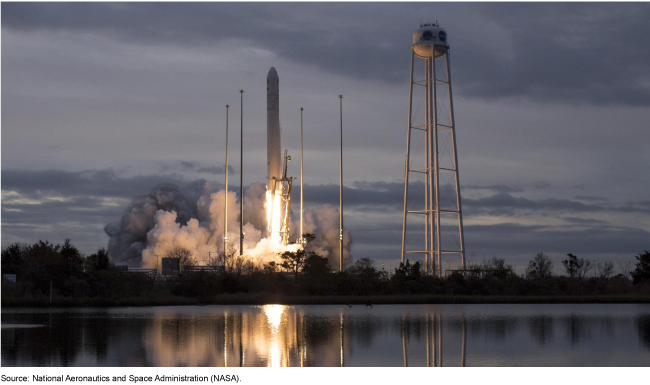 The Federal Aviation Administration (FAA) recently updated and streamlined its launch and reentry licensing regulations but has made less progress on other key commercial space transportation regulations. The new licensing regulations, issued in December 2020, replaced prescriptive requirements—in which a certain technology or action was required—with a performance-based regulatory framework, which provides applicants flexibility in how they achieve required outcomes, such as a specific level of safety. Given its focus on the licensing regulations, FAA placed on hold revisions to other regulations governing commercial space transportation—revisions which, according to FAA officials, are warranted given the industry's evolution. For example, FAA has not yet begun to revise its financial responsibility regulations, which require launch companies conducting FAA-licensed launches to purchase insurance to cover damage to third parties in case of a launch mishap. According to FAA officials, revising these regulations is their next planned rulemaking and when finalized, will respond to GAO's recommendations to improve FAA's methodologies for evaluating and calculating potential third-party losses from launch and reentry mishaps and help ensure the federal government is not exposed to greater liability than expected.

FAA also faces ongoing challenges regulating an evolving industry. In particular, as GAO previously reported, FAA continues to face the challenge of whether and when to regulate the safety of crew and spaceflight participants. While some companies have announced plans to take tourists to space within the next several years, FAA is prohibited by statute from regulating crew and passenger safety before 2023, except in response to events that caused or posed a risk of serious or fatal injury. However, FAA has taken some steps in anticipation of the expiration of the statutory moratorium, such as working with its industry advisory committee to develop and disseminate human spaceflight best practices.

FAA also has taken some steps to help the agency keep pace with changes in the industry. For example, in response to recommendations GAO made in 2019, FAA recently assessed its workforce to identify skills and competencies that are needed among its workforce and is working to improve its workload projections to better account for the full range of its regulatory activities and the timeline of its licensing process. Such efforts are critical for ensuring FAA can better anticipate and respond to the growing and evolving commercial space industry and FAA's emerging workforce needs.

The commercial space transportation industry provides launch services for government and private customers that carry objects, such as satellites and vehicles with scientific research, or passengers to or from space. Continued growth and evolution in the industry is expected as reliance on space-based applications increases. Within FAA, the Office of Commercial Space Transportation (AST) is charged both with overseeing the industry, including licensing and monitoring launch vehicle operations, and promoting the industry.

This statement describes FAA's efforts to update regulations governing commercial space transportation; challenges FAA faces regulating an evolving industry; and steps FAA has taken to help ensure it is positioned to meet the needs of the evolving industry. This statement is based largely on GAO's body of work on commercial space transportation, including GAO-19-437 issued in May 2019. To update this information, GAO interviewed FAA officials and reviewed applicable statutes, regulations and selected industry documents.