We have issued 11 annual reports on federal programs with fragmented, overlapping, or duplicative goals or activities. In those reports, we suggested hundreds of ways to address those problems, reduce costs, or boost revenue. Our most recent report is from May 2021.

Since these annual reports began, Congress and agencies have fully or partially implemented many of the actions we suggested. We estimate that this will likely lead to more than half a trillion dollars ($515 billion) in cost savings and revenue increases.

Fully addressing the remaining 441 actions could save tens of billions more dollars and improve government services. 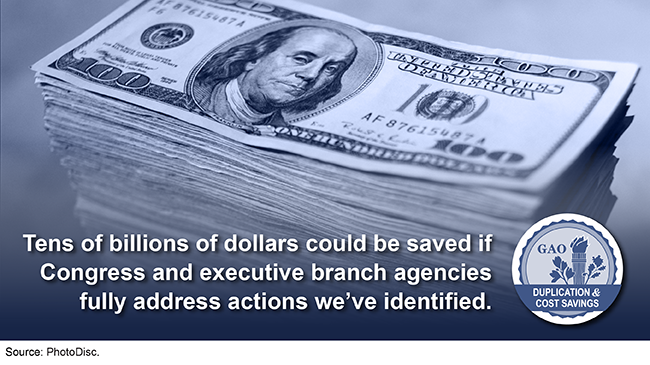 Congress and executive branch agencies have made significant progress in addressing many of the 1,200 actions that GAO identified from 2011 to 2021 to reduce costs, increase revenues, and improve agencies’ operating effectiveness, although work remains to fully address them. As shown in the figure below, these efforts have resulted in approximately $515 billion in financial benefits, an increase of $85 billion from GAO’s 2020 annual report. These are rough estimates based on a variety of sources that considered different time periods and used different data sources, assumptions, and methodologies.

Total Reported Financial Benefits of $515 Billion, as of 2021

To achieve these benefits, as of August 2021, Congress and executive branch agencies have fully addressed 666 (56 percent) of the 1,200 actions GAO identified from 2011 to 2021 and partially addressed 207 (17 percent). Examples of actions taken that led to significant financial benefits include:

Further steps are needed to fully address the actions GAO identified from 2011 to 2021. While GAO is no longer tracking 93 actions due to changing circumstances, GAO estimates that fully addressing the remaining 441 open actions could result in savings of tens of billions of dollars and improved government services, among other benefits. For example:

The federal government continues to respond to and recover from significant public health and economic challenges battling the COVID-19 pandemic.

While the size and scope of these efforts demand strong accountability and continued agility, opportunities also exist for achieving billions of dollars in financial savings and improving the efficiency and effectiveness of a wide range of federal programs in other areas.

GAO has responded with annual reports to a statutory provision directing it to identify and report on federal programs, agencies, offices, and initiatives—either within departments or government-wide. These entities and initiatives have duplicative, overlapping, or fragmented goals or activities, as well as additional opportunities to achieve cost savings or enhance revenue collection.