While most Americans have broadband internet access, many do not—a gap known as the digital divide. Federal efforts to bridge it rely on data FCC collects from broadband providers. We have raised concerns that this data overstates service.

In 2020, FCC was tasked with mapping all U.S. locations that are and could be served by broadband, which should allow more precise assessments of where it is lacking. FCC is seeking a contractor for the work and said the process will include ways to correct errors.

Stakeholders told us FCC will need many data sources to identify key information such as property types and building locations. 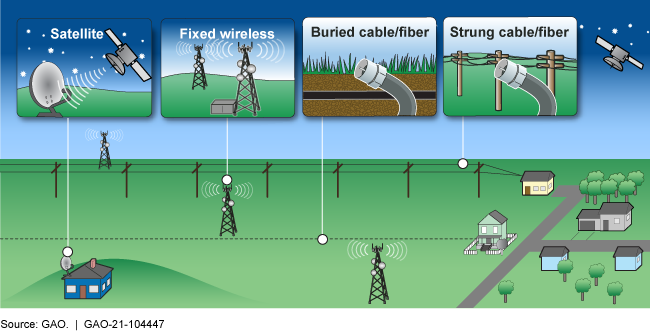 The Federal Communications Commission (FCC) was tasked in the 2020 Broadband Deployment Accuracy and Technological Availability Act (Broadband DATA Act) to create a location fabric, which is a dataset of all locations or structures in the U.S. that could be served by broadband, over which broadband deployment data can be overlaid. The purpose of this data collection effort is to improve the granularity and precision of FCC's broadband deployment mapping, which will allow FCC to more precisely assess where Americans still lack access to broadband. As a start, FCC has hired a data architect and met with data companies and states to identify options. FCC has issued a request for proposals for a product to meet FCC's location fabric needs. Additionally, FCC officials said that the data company that generates the location fabric will be responsible for developing a process for state, local, and tribal entities, and others to question and correct fabric location data to improve their accuracy, as required by the law.

Stakeholders GAO interviewed identified challenges FCC faces with developing a location fabric, including incomplete or conflicting data sources, but said that such challenges can be overcome by using multiple sources of data. For example, according to stakeholders, there is no one source of location data that will be sufficient for FCC and its contract data company to develop a precise location fabric; therefore, it is necessary to integrate four main types of data to have a complete location fabric, as shown in the figure. These data can be sourced from federal, state, local, and commercial sources. State-level pilots have shown that overlaying these data increases the accuracy of the location fabric and addresses the limitation that some sources have incomplete data. FCC will need to manage other challenges as well, such as use restrictions.

Broadband is critical for commercial, educational, and social functions. While most Americans have access to broadband, many still do not—a gap known as the digital divide. To help close this divide, federal programs provide funding to support broadband deployment in unserved areas. According to FCC, these programs rely on data FCC collects from broadband providers to identify which areas are and are not served to target their limited funds. However, GAO has raised concerns about FCC's data for lacking accuracy and overstating service. FCC has been measuring broadband deployment by counting an entire census block as served if a provider reports that it offers service to at least one location in the census block. This method can overstate the extent of broadband deployment if the data show that a census block has broadband but not all locations in the census block are actually served. FCC began an effort in 2017 to improve its broadband data, and, in 2020, the Broadband DATA Act required FCC to develop a location fabric.