People rely on the 146,000 bridges in the National Highway System. Most of the bridges are made of materials that are susceptible to corrosion—a leading cause of bridge failure. The percentage of bridges in "good" condition has declined since 2016.

We recommended providing this information as part of FHWA's ongoing bridge preservation efforts.

Corrosion on a National Highway System bridge in Wyoming 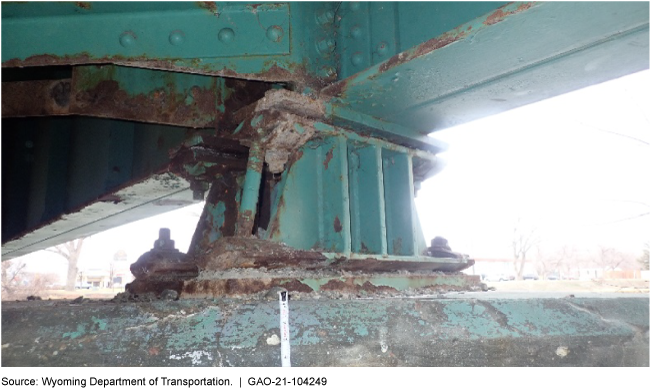 State practices to prevent and manage corrosion vary based on environmental factors and bridge condition. For example, states exposed to sea water and deicing chemicals may clean bridges to remove materials that could accelerate corrosion. Four of the five selected states prioritized rehabilitating and replacing poor condition bridges, while the fifth state said it took steps to address corrosion to preserve and maintain bridges in good and fair condition. States are transitioning to asset management practices that emphasize bridge preservation strategies. However, officials from the selected states said limited information about specific corrosion practices' effectiveness is a challenge to implementing asset management practices. For example, officials from some selected states said they use sealant on bridge decks to prevent corrosion while officials from another said they do not because they do not know how effective it is.

FHWA, within the Department of Transportation, helps states address corrosion through research and technical assistance. However, FHWA efforts have generally focused on overall bridge condition and may not meet states' needs to determine the circumstances in which to use specific practices. For example, FHWA's Bridge Preservation Guide identifies practices that can be part of a bridge preservation approach but does not indicate under what circumstances they are most effective. Although FHWA does not endorse specific practices, officials recognize their role in helping states make well-informed decisions regarding bridge corrosion. As states continue transitioning to an asset management approach, providing information about the circumstances under which different corrosion practices are most effective could help states make best use of their resources.

In 2021, U.S. bridges, including those on the NHS, were estimated to need billions of dollars in repairs, including efforts to mitigate the effects of corrosion. House Report 116-106 included a provision for GAO to review the status of states' bridge corrosion-control planning. This report examines: (1) trends in the condition of bridges on the NHS and what is known about how corrosion affects bridge condition, (2) practices states use to address corrosion on NHS bridges and how selected states prioritize efforts to address corrosion, and (3) how FHWA assists states in addressing bridge corrosion.

GAO is recommending that FHWA's ongoing bridge preservation efforts include activities that focus on addressing the challenges states face with determining the circumstances under which specific corrosion practices and materials are most effective. DOT agreed with our recommendation and provided technical comments, which we incorporated as appropriate.