After a series of high-profile accidents, the Federal Transit Administration was tasked with playing a larger role in overseeing safety for public transportation. It now works with transit agencies to develop data-driven safety plans, among other activities.

We looked at several aspects of FTA's involvement, such as:

We recommended that FTA craft a plan to implement lessons learned from the camera pilot. 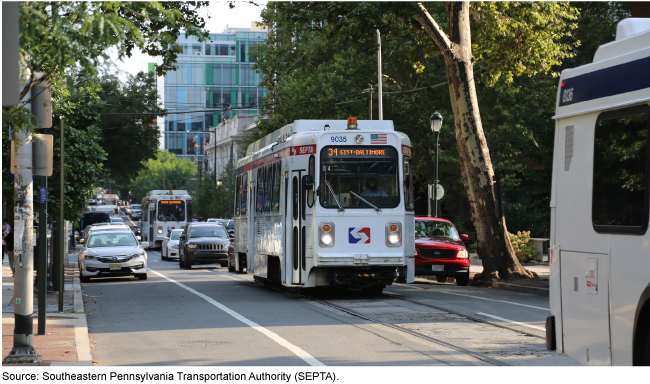 FTA established a Safety Risk Management (SRM) process to identify, assess, and mitigate safety risks across the nation's transit agencies. During the initial implementation, FTA selected four safety concerns to review (see fig. below). According to FTA, the use of cameras on rail transit was a pilot project, and FTA has completed four of the five steps in its process for the camera safety pilot. Though FTA continues to evaluate that pilot and work on the other three safety concerns, it has not completed actions to prepare for future rounds of the SRM process. In particular, FTA has not identified and documented lessons learned from the pilot. Documenting and incorporating such lessons could enhance the effectiveness and timeliness of FTA's SRM process and thus FTA's ability to address transit-wide safety risks.

FTA continues to gather information while it considers whether to mandate certain transit safety standards. FTA has issued safety bulletins for rail cameras and end-of-railcar signage. These bulletins suggest but do not require certain actions related to the installation of cameras and signage in rail transit cars. FTA, however, has not yet initiated a rulemaking for any mandatory federal safety standards. While the diverse nature of the transit industry can make setting federal safety standards challenging, transit agencies GAO spoke with were generally open to mandatory safety standards for some safety issues. For example, many of the selected transit agencies expressed support for requiring medical examinations of employees, as well as other so-called human-factor safety risks.

GAO was asked to examine how FTA is implementing its new responsibilities and authorities. This report examines (1) selected transit agencies' experiences in incorporating SMS in their new safety plans; (2) steps FTA is taking to identify, assess, and mitigate safety risks; and (3) FTA's status on mandating safety standards and stakeholders' views on the benefits and challenges of such standards. GAO reviewed FTA documents on safety oversight policies and practices and interviewed officials from 12 transit agencies and their 9 respective state oversight agencies. GAO selected transit agencies to reflect a variety of modes, sizes, age, and geographic diversity.

GAO recommends that FTA identify and document lessons learned from the camera pilot, including a plan to implement needed changes. DOT concurred with this recommendation and provided technical changes to the draft report, which we incorporated as appropriate.