The United States has been building Afghanistan's security forces to help counter terrorist threats. Since 2005, Congress has appropriated more than $78.8 billion to build, equip, train, and sustain these forces. Concerns have been raised in Congress about the high cost of training contracts (about $4.3 billion so far). 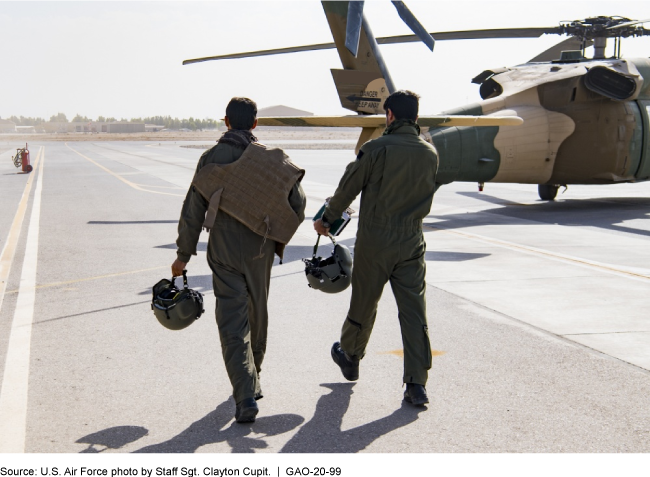 Combined Security Transition Command-Afghanistan (CSTC-A) has established processes to identify capability gaps within the Afghan National Defense and Security Forces (ANDSF), develop and select training needed to address those gaps, and identify associated funding requirements. CSTC-A generally includes these requirements in the Afghanistan Security Forces Fund (ASFF) budget justification book. Many of the key decisions and associated cost assumptions on how CSTC-A and Train Advise Assist Command–Air (in the case of Afghan pilot training) intend to carry out ASFF training efforts are proposed 18-24 months before the training will occur (see figure).

ASFF-funded training contracts are developed and executed under a process modeled on the U.S. government's foreign military sales program. Prior to April 2019, most ASFF-funded training requirements were filled under a single-award indefinite delivery, indefinite quantity (IDIQ) contract that supported a wide range of DOD training needs. An IDIQ contract provides for an indefinite quantity, within stated limits, of supplies or services during a fixed period. The government places orders for individual requirements. According to an Army official, that contract's broad scope and high contract value ceiling made it a highly expedient way to contract for various types of training for the ANDSF. However, contracting officals stated that using a single-award contract limited DOD's ability to negotiate some costs. At that point, DOD began to transition to an approach using several contracts, including one with multiple providers. Given that DOD executed its first task order under these new contracts in April 2019, it is too early for GAO to comment on the efficacy of this new approach.

DOD has varying degrees of visibility over ASFF-funded contracts. DOD officials stated that they have visibiliity at the broadest level of the overall execution of the ASFF budget, including funding associated with Afghan National Army training. At the individual contract level, the military services' contracting commands maintain contract files, but the services' systems do not interface with one another. According to DOD officials, although DOD can obtain visibility over ASFF training contracts in the aggregate, the department must work with the contracting commands at the respective military services to gather information specific to training contracts.

The United States has made a commitment to building Afghanistan's security and governance structure in order to counter terrorist threats and create sustainable security and stability in Afghanistan. Since 2005 Congress has appropriated more than $78.8 billion for the ASFF to build, equip, train, and sustain the Afghan National Defense and Security Forces. Over that period, nearly $4.3 billion has been expended to support the training and operations of the Afghan National Army. Training requirements are primarily fulfilled through contracts. In recent years, concerns have been raised in Congress about the high costs of some of these training contracts.