The Department of Transportation subsidizes airline service to communities that would not be profitable to serve.

Laws and program policy regarding community eligibility have changed since 2010, but the number of participants has stayed about the same. For example, in 2014, DOT started enforcing the annual $200-per-passenger subsidy cap. Subsidies ended for a few communities with higher costs, but many got waivers.

Community officials and airlines cited challenges to keeping communities eligible, such as operating under a subsidy cap while labor costs rise. They suggested options for reform, including adjusting subsidy caps for inflation.

Communities in the Contiguous United States Receiving Subsidized Air Service through the Essential Air Service Program as of October 1, 2018 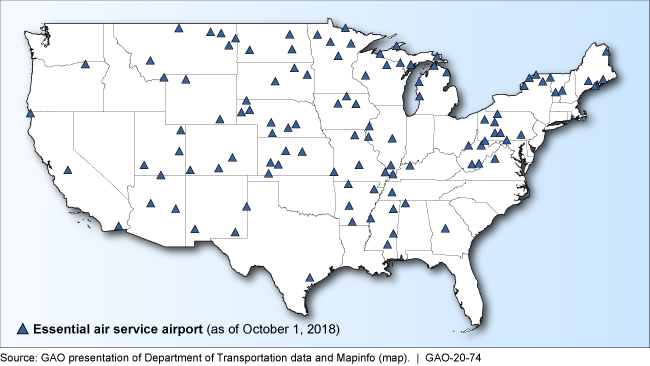 Statutory changes since 2010 have reduced the number of communities eligible for subsidized air service through the Essential Air Service (EAS) program; however, the Department of Transportation (DOT) granted waivers to most of the communities that applied, resulting in little change in the number of communities receiving EAS. In 2012, statutory changes limited eligibility for the program in the contiguous United States to those communities receiving EAS in fiscal year 2011. Further statutory changes set a maximum average per-passenger subsidy, and a minimum number of passengers, that some communities would have to meet to retain eligibility. DOT also resumed enforcing the $200 per-passenger subsidy cap for certain communities. While these changes limited eligibility, in some cases the changes also gave DOT the option of providing waivers—most of which DOT granted. Thus, as noted, the overall number of communities receiving EAS remained about the same; however, EAS expenditures increased from $161 million in fiscal year 2010 to $277 million in fiscal year 2018 (see figure). DOT officials said this increase was due, in part, to factors affecting the entire airline industry, such as increased labor wages.

EAS Expenditures and Communities for Fiscal Years 2010 through 2018

Community officials and air carriers GAO interviewed cited several challenges associated with EAS and suggested options for reform. For example, some carriers said it was difficult to find and retain pilots due to an insufficient supply of qualified pilots. At the same time, pilot wages have increased, making it difficult to provide quality service without exceeding the subsidy caps. Some carriers and community officials noted that the $200 subsidy cap has not changed for several years to account for inflation or these increased costs. To address these and other challenges, stakeholders suggested a number of options, such as indexing the $200 subsidy cap to inflation or allowing communities that lost eligibility to re-apply for the program. Several of these reforms would result in additional program costs.

Congress established EAS as part of the 1978 deregulation of the U.S. airline industry. Through the EAS program, DOT provides subsidies to airlines to make service available to communities that airlines would otherwise not serve. Since 2010, several statutory changes have limited eligibility for EAS subsidies by, among other things, changing eligibility requirements. In spite of these changes, program costs have continued to rise, prompting questions about whether additional modifications should be made.

A provision in the Federal Aviation Administration Reauthorization Act of 2018 directed GAO to examine several aspects of the EAS program. This report discusses, among other objectives, (1) how federal laws enacted since 2010 have affected air service to communities funded through the program; and (2) challenges that communities and air carriers face with EAS, and options for reform.

GAO reviewed relevant federal laws, DOT orders, and DOT program data. GAO also interviewed representatives, such as airport managers and local government officials, from 17 communities that have participated in EAS; representatives from 10 of the 11 air carriers that participate in the program; and DOT officials. This report focuses on the EAS program as it operates in the contiguous United States, as there are different rules for EAS in Alaska and Hawaii.