We testified about our report on whether there are racial or ethnic disparities in the military justice system and responses to that report’s recommendations.

Among other things, we found

Race was not a statistically significant factor for a conviction

The military services do not record information on race and ethnicity the same way, making it difficult to identify disparities

Defense and Homeland Security have made progress on some of our 11 recommendations. However, work remains to address the causes of disparities. 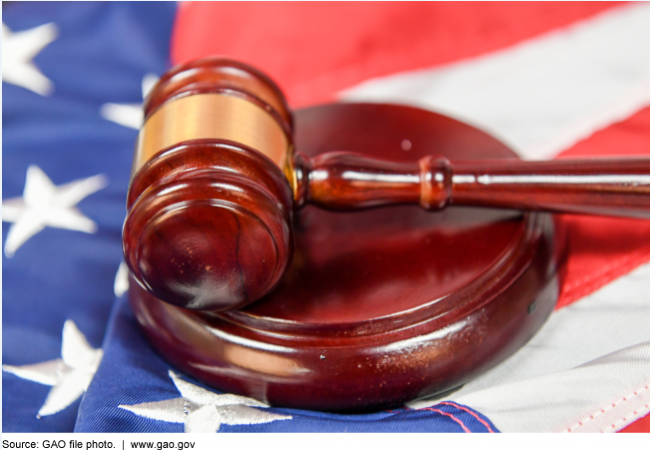 Gavel on an American flag

GAO's analysis of available data identified disparities in how likely servicemembers of different races were to be subjects of investigations recorded in military criminal investigative organization databases and tried in general and special courts-martial in particular. For example, in three military services, Black servicemembers were about twice as likely as White servicemembers to be tried in general and special courts-martial. Racial disparities generally were not present in convictions or punishments. These findings show an association for disparities at particular stages of the military justice process, but are inconclusive regarding other stages. However, GAO's findings of racial disparities, taken alone, do not establish whether unlawful discrimination has occurred, as that is a legal determination that would involve other corroborating information and supporting statistics.

Likelihood That Servicemembers Were Subjects of Recorded Investigations and Tried in General and Special Courts-Martial, Fiscal Years 2013-2017

Note: These analyses, taken alone, should not be used to make conclusions about the presence of unlawful discrimination. These multivariate regression analysis results estimate whether a racial group is more likely or less likely to be the subject of an investigation or a trial in general or special courts-martial after controlling for race, gender, rank, and education, and in the Air Force, years of service. GAO made all racial comparisons to White servicemembers, and grouped individuals of Hispanic ethnicity together, regardless of race. The Other race category includes individuals who identified as American Indian/Alaska Native, Asian, Native Hawaiian/Other Pacific Islander, and multiple races.

The Uniform Code of Military Justice (UCMJ) was established to provide a statutory framework that promotes fair administration of military justice. Every active-duty servicemember is subject to the UCMJ, with more than 258,000 individuals disciplined from fiscal years 2013-2017, out of more than 2.3 million unique active-duty servicemembers. A key principle of the UCMJ is that a fair and just system of military law can foster a highly disciplined force.

This statement provides information on 1) the collection of race and ethnicity information in the military services' databases, 2) the extent of racial disparities in investigations, disciplinary actions, and case outcomes in the military justice system, and 3) steps taken by DOD to study any identified disparities. This statement is based on GAO -19-344 issued on May 30, 2019. As part of that work, GAO analyzed data from the investigations, military justice, and personnel databases from the military services, including the Coast Guard, from fiscal years 2013-2017 and interviewed agency officials.