We testified on the Department of Veterans Affairs’ ability to provide its medical centers with critical medical supplies during its response to the COVID-19 pandemic.

Our initial observations found that VA’s long-standing problems with its antiquated inventory management system limited how efficiently the agency could oversee the stock of critical medical supplies—such as N95 facemasks and isolation gowns—at its medical centers.

The VA has taken steps to improve its response efforts, but fully resolving the problem at the agency level is at least 7 years away. 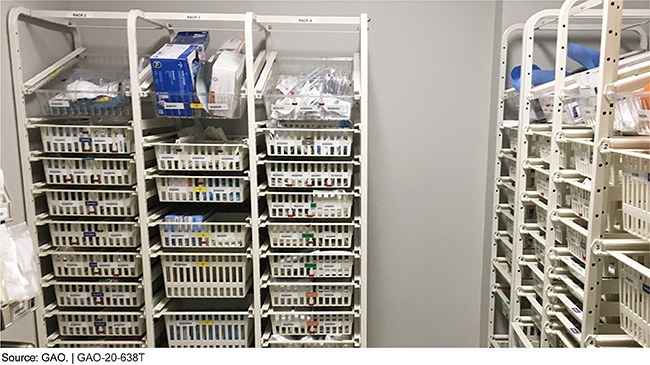 Supplies in a shelving unit

The Department of Veterans Affairs (VA) has taken some steps in recent years to modernize its processes to acquire hundreds of millions of dollars-worth of medical supplies annually. However, implementation delays for key initiatives, including a new, enterprise-wide inventory management system, limit VA's ability to have an agile, responsive supply chain. Prior to the Coronavirus Disease 2019 (COVID-19) pandemic, in November 2017 and in GAO's High-Risk report in March 2019, GAO reported on weaknesses in VA's acquisition management. For example, GAO reported that VA's implementation of its Medical-Surgical Prime Vendor-Next Generation (MSPV-NG) program—VA's primary means for purchasing medical supplies—lacked an effective medical supply procurement strategy, clinician involvement, and reliable data systems. GAO also found that several of VA's medical supply management practices were not in line with those employed by private sector leading hospital networks.

VA is developing another iteration of its MSPV program, called MSPV 2.0, which GAO's preliminary observations show is intended to address some of the shortfalls GAO has identified in its past and ongoing program reviews. In November 2017, GAO recommended that VA develop, document and communicate an overarching MSPV-NG strategy—to include how the program office will prioritize categories of supplies and increase clinician involvement in this process. Preliminary observations from GAO's ongoing work indicate that VA has taken some steps, as it implements MSPV 2.0, to address this priority recommendation. However, GAO's preliminary observations also indicate that the MSPV 2.0 program implementation is delayed and some of these existing program challenges may not be remedied.

Based on preliminary observations from GAO's ongoing work, VA's implementation of a new supply and inventory management system is delayed. As a result, VA had to rely on an antiquated inventory management system, and initial, manual spreadsheets to oversee the stock of critical medical supplies at its medical centers. This limited the ability of VA management to have real-time information on its pandemic response supplies, ranging from N95 face masks to isolation gowns, to make key decisions. As of April 2020, VA has an automated tool to manage its reporting process, but the information must be gathered and manually reported by each of VA's 170 medical centers on a daily basis.

GAO's preliminary observations also show that in response to COVID-19, VA is using various contracting organizations and mechanisms to meet its critical medical supply needs. These include using national and regional contracting offices to obtain supplies from existing contract vehicles, new contracts and agreements, and the Federal Emergency Management Administration's Strategic National Stockpile to respond to the pandemic.

VA spends hundreds of millions of dollars annually to meet the health care needs of about 9 million veterans. In March 2019, GAO added VA Acquisition Management to its High Risk list due to longstanding problems such as ineffective purchasing of medical supplies and lack of reliable data systems.

GAO has made 40 recommendations since 2015 to improve acquisition management at the VA. VA agreed with those recommendations and has implemented 22 of them. Further actions are needed to implement the remaining recommendations, such as GAO's recommendation that VA implement an overarching MSPV strategy, and demonstrate progress toward removing this area from GAO's High-Risk list.