In 2019, out of about 1 million disability claims the Veterans Benefits Administration processed, about 18,000 were for veterans living abroad. The VBA often uses medical exams to determine if disability benefits are warranted.

Veterans' access to disability exams abroad also improved as VBA increased the number of countries using VBA-contracted medical examiners instead of embassy-referred examiners. However, travel costs and other factors sometimes hinder access to quality exams. We made 5 recommendations for improvements. 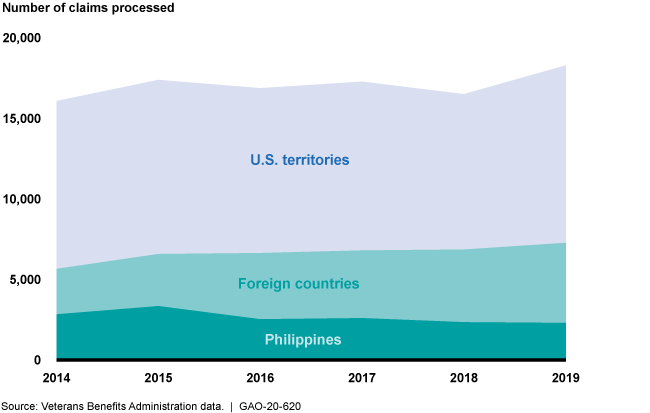 The number of disability claims for veterans living abroad—in foreign countries or U.S. territories—increased 14 percent from fiscal years 2014 to 2019. During this time period, claims processing time frames improved. In fiscal year 2019, the Veterans Benefits Administration (VBA) of the Department of Veterans Affairs (VA) approved comparable percentages of disability claims for veterans living abroad and domestically—63 percent and 64 percent respectively. However, for a subset of these claims—those where veterans likely received a disability medical exam scheduled by Department of State (State) embassy staff—approval rates were often lower.

Veterans' access to disability medical exams abroad improved as VBA has increasingly relied on contracted examiners, rather than embassy-referred examiners, to conduct these exams. According to VBA, this shift expanded the pool of trained examiners abroad and increased the frequency and depth of VBA's quality reviews for contract exams. These quality reviews help VBA and its contractor identify and address common errors, according to VBA and contractor officials. However, several factors continue to limit some veterans' ability to access quality disability medical exams (see figure).

Unknown quality of certain exams: A subset of veterans living abroad receive disability medical exams from an embassy-referred provider. VBA does not systematically assess the quality of these exams. Without doing so, VBA cannot determine if such exams affect the approval rates of veterans who receive them or contribute to longer processing times and are unable to make informed decisions about their use.

Examiner reimbursement: The Veterans Health Administration's (VHA) Foreign Medical Program reimburses examiners referred by embassy staff via paper checks in U.S. currency. These checks may be slow to arrive and not accepted by foreign banks, according to State and other officials and staff we interviewed. Such payment issues can deter examiners from being willing to conduct disability medical exams and thus limit veterans' access to these exams in foreign countries.

GAO is making five recommendations, including that VBA assess the quality of embassy-referred exams, VBA and VHA assess whether to reimburse beneficiaries for travel to disability medical exams in foreign countries, and that VBA and VHA pay examiners located by embassy staff electronically. The Department of Veterans Affairs concurred with GAO's recommendations.