Attrition rates for female enlisted and commissioned officers were higher than for males, but this gap has narrowed

Women were 28% more likely to leave the service than men

Our 5 recommendations are to better guide and monitor DOD and military service efforts to recruit and retain women. 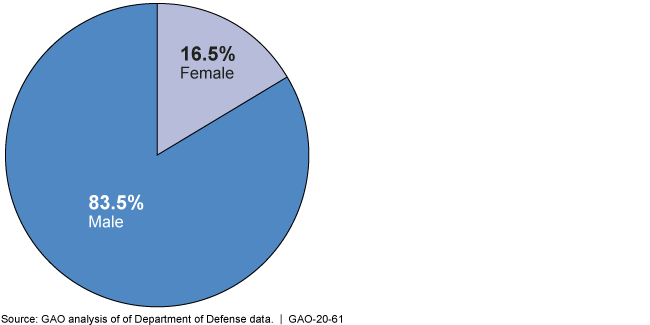 The Department of Defense (DOD) experienced slight increases in the overall percentage of female active-duty servicemembers from fiscal year 2004 through 2018 (15.1 percent in fiscal year 2004 to 16.5 percent in fiscal year 2018), with those percentages varying by pay grade category (see figure). During that period, female enlisted and commissioned officers had higher annual attrition rates than corresponding males. However, the gaps between male and female attrition rates have narrowed. For example, in fiscal years 2004 and 2018, female enlisted servicemembers' annual attrition rates were 33.1 and 8.6 percent, respectively, and enlisted males' annual attrition rates were 22.7 and 6.1 percent respectively. GAO's statistical model found that the likelihood of separation for female servicemembers is 28 percent higher than that of males. GAO's literature review of selected studies on reasons why females separate from the military identifed six themes, including family planning, sexual assualt, and dependent care, as influencing separations.

Gender Representation in the U.S. Military by Pay Grade, Fiscal Years 2004 and 2018

DOD has identified female recruitment and retention as important to diversity in the military, but the services do not have plans that include goals, performance measures, and timeframes to guide and monitor current or future efforts to recruit and retain females. According to officials, DOD is currently updating its diversity and inclusion strategic plan; however, neither its prior plan nor the updated plan include goals, such as recruitment or retention goals, performance measures, and timelines for any one particular demographic group. DOD officials stated that retention goals have, in the past, been misconstrued as quotas and, as such, the department does not set goals or targets for gender. However, goals are not quotas and can help guide continued improvement. Without DOD guidance and service plans with goals, performance measures, and timeframes to monitor female recruitment and retention efforts, DOD may continue to miss opportunities to recruit and retain a valuable segment for its active-duty force.

The role of female servicemembers in the military has expanded in the last half century as restrictions on female servicemembers serving on active duty, including in combat, have been eliminated. DOD has also stated that recruiting and retaining women is important in order to reflect the nation's population and ensure strong military leadership.

House Report 115-676 includes a provision that GAO review female retention and promotion in the military. This report examines (1) trends in the percentage of female active-duty servicemembers in the military and their attrition rates, including reported factors leading to attrition; (2) how female active-duty servicemember promotion rates compare with those of males and among females with differing characteristics, and what factors influence these rates; and (3) the extent to which DOD and the military services have plans to guide and monitor female active-duty servicemember recruitment and retention. GAO analyzed fiscal year 2004 through 2018 personnel data to identify attrition and promotion rates and conducted statistical modeling to determine the likelihood of separation and promotion, reviewed DOD reports and other literature on servicemember attrition, and interviewed officials from DOD and other military organizations.

GAO recommends that DOD provide the services with guidance to develop plans with goals, performance measures, and timelines to address female recruitment and retention efforts, and for the services to develop such plans. DOD concurred with the recommendations.