We identified 2 main causes for the delays:

As a result, the Navy relies on excessive use of overtime. Our recommendations include addressing workforce requirements to avoid excessive overtime. 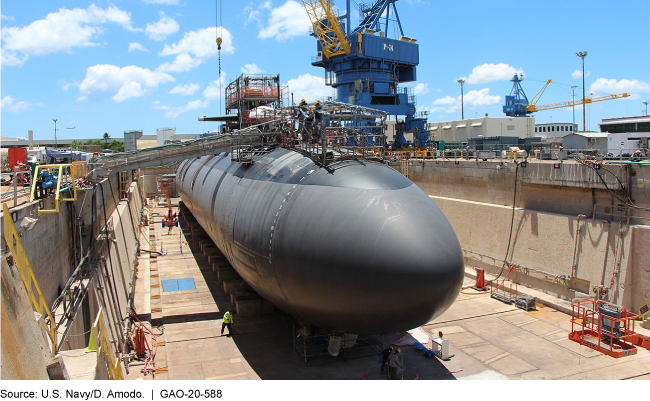 Maintenance Delays at Navy Shipyards for Fiscal Years 2015 through 2019

The Navy has taken steps but has not fully addressed the unplanned work and workforce factors causing the most maintenance delays. First, the Navy updated planning documents to improve estimates and plans to annually update these data, but knowing whether changes improve results may take several years. Second, the Navy has consistently relied on high levels of overtime to carry out planned work. GAO's analysis found that high overtime among certain production shops, such as painting or welding, averaged from 25 to 32 percent for fiscal years 2015 through 2019, with peak overtime as high as 45 percent. Furthermore, shipyard officials told us that production shops at all four shipyards are working beyond their capacity. Overtime at such rates has been noted as resulting in diminished productivity. Third, the Navy initiated the Shipyard Performance to Plan initiative in the fall of 2018 to address the unplanned work and workforce factors, but it has not yet developed 13 of 25 planned metrics that could improve the Navy's understanding of the causes of maintenance delays. In addition, the Shipyard Performance to Plan initiative does not include goals, milestones, and a monitoring process along with fully developed metrics to address unplanned work and workforce weaknesses. Without fully developing metrics and implementing goals, action plans, milestones, and a monitoring process, the shipyards are not likely to address unplanned work and workforce weaknesses and the Navy is likely to continue facing maintenance delays and reduced time for training and operations with its aircraft carriers and submarines.

For fiscal years 2015 through 2019, the Navy spent $2.8 billion in capital investments to address shipyard performance, among other things. However, the shipyards continue to face persistent and substantial maintenance delays that hinder the readiness of aircraft carriers and submarines.

The Senate Armed Services Committee, in a report accompanying a bill for the National Defense Authorization Act for Fiscal Year 2019, included a provision for GAO to review Navy shipyards' performance. GAO evaluated the extent to which the Navy (1) completed maintenance at its shipyards on time on aircraft carriers and submarines in fiscal years 2015 through 2019, (2) has identified the main factors leading to maintenance delays, and (3) has addressed the main factors affecting any delays in that maintenance. GAO reviewed data related to Navy shipyard maintenance for fiscal years 2015 through 2019, analyzed factors contributing to delays and plans to address them, visited all four Navy shipyards, and met with Navy and shipyard officials.

GAO is making three recommendations to the Navy, including updating workforce planning requirements to avoid the consistent use of overtime; completing the development of shipyard performance metrics; and developing and implementing goals, action plans, milestones, and monitoring results. The Navy concurred with all three recommendations.