The Army is developing a portfolio of Next Generation Combat Vehicles to provide more firepower, protection, and mobility. The Army's plans for these tanks and other armored vehicles prioritize rapid development. That can limit insight into potential risks.

The Army took some steps to reduce the risks of cost overruns and program delays. But for two of its efforts, the Army didn't fully consider all potential cost uncertainties. It also delayed key engineering reviews for these efforts, increasing the risk of vehicle design problems.

We recommended that the Army follow cost estimating and systems engineering leading practices for these efforts. 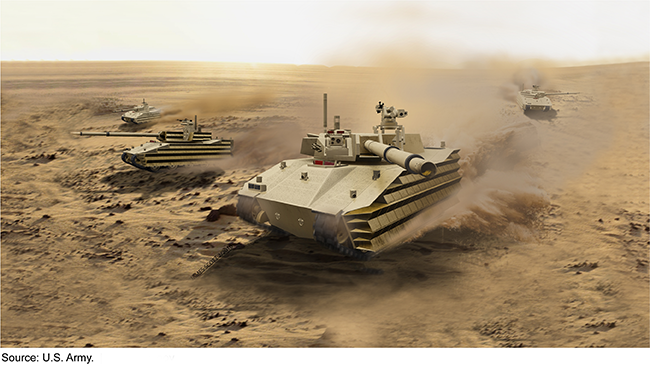 Vehicles of the Next Generation Combat Vehicles Portfolio

The two programs within the portfolio that recently initiated acquisitions—Mobile Protected Firepower and Optionally Manned Fighting Vehicle—have taken some steps to mitigate risks in cost and technology consistent with GAO's leading practices. The Army's use of the middle-tier approach for these efforts may facilitate rapid development, but the programs could benefit from additional application of GAO's leading practices. For example, the programs identified some risks in their cost estimates, but because each presented a single estimate of the total cost—referred to as a point estimate—these estimates do not fully reflect how uncertainty could affect costs. Similarly, the programs took some steps to mitigate technical risk by limiting development to 6 years or less and incrementally introducing new technologies, steps consistent with GAO's leading practices. However, by delaying key systems engineering reviews, the programs took some steps not consistent with leading practices, which could increase technical risk. While trade-offs may be necessary to facilitate rapid development, more consistent application of GAO's leading practices for providing cost estimates that reflect uncertainty and conducting timely systems engineering reviews could improve Army's ability to provide insight to decision makers and deliver capability to the warfighter on time and at or near expected costs.

The Army has taken actions to enhance communication, both within the Army and with Department of Defense stakeholders, to mitigate risks. Within the Army, these actions included implementing a cross-functional team structure to collaboratively develop program requirements with input from acquisition, contracting, and technology development staff. Program officials also coordinated with other Army and Department of Defense stakeholders responsible for cost and test assessment, even where not required by policy, to mitigate risk.

The Army views the NGCV portfolio as one of its most critical and urgent modernization priorities, as many current Army ground combat vehicles were developed in the 1980s or earlier. Past efforts to replace some of these systems failed at a cost of roughly $23 billion. In November 2017, the Army began new efforts to modernize this portfolio.

GAO was asked to review the Army's plans for modernizing its fleet of ground combat vehicles. This report examines (1) the acquisition approaches and contracting strategies the Army is considering for the NGCV portfolio, (2) the extent to which the Army's efforts to balance schedule, cost, and technology are reducing acquisition risks for that portfolio, and (3) how the Army is communicating internally and externally to reduce acquisition risks.

GAO reviewed the acquisition and contracting plans for each of the vehicles in the portfolio to determine their approaches; assessed schedule, cost, and technology information—where available—against GAO's leading practice guides on these issues as well as other leading practices for acquisition; and interviewed Army and DOD officials.

GAO is making three recommendations, including that the Army follow leading practices on cost estimation and systems engineering to mitigate program risk. In its response, the Army concurred with these recommendations and plans to take action to address them.