"Internet of Things" technology refers to devices collecting information, communicating it to a network and, in some cases, completing a task—like unlocking doors using a smartphone application.

Many agencies use this technology to control equipment, monitor building systems, or perform other tasks. For example, the Environmental Protection Agency uses sensors on buoys to monitor water quality and detect substances that could be harmful to humans and fish.

There are benefits to this technology—such as freeing up staff to do other work. However, some agencies do not use the technology due to cybersecurity challenges and other concerns.

Illustration of a Water-Monitoring Buoy 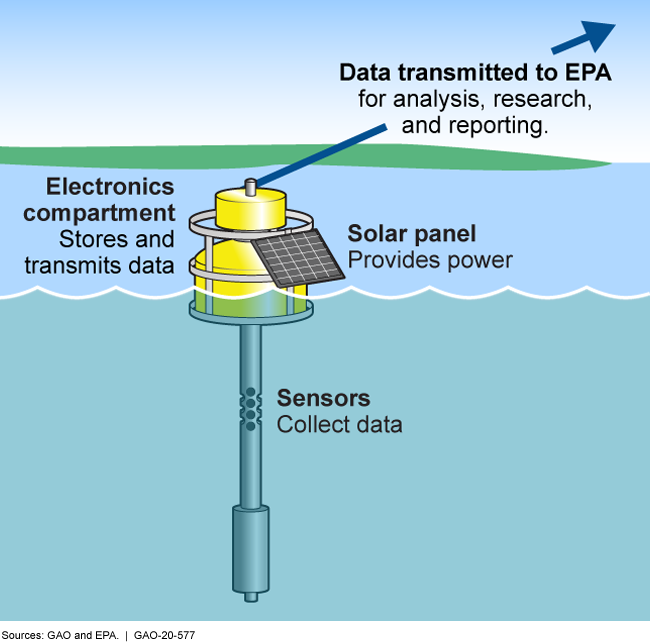 Many federal agencies (56 of 90) responding to GAO's survey reported using Internet of Things (IoT) technologies. Most often, agencies reported using IoT to: (1) control or monitor equipment or systems (42 of 56); (2) control access to devices or facilities (39 of 56); or (3) track physical assets (28 of 56) such as fleet vehicles or agency property. Agencies also reported using IoT devices to perform tasks such as monitoring water quality, watching the nation's borders, and controlling ships in waterway locks. Furthermore, IoT use by federal agencies may increase in the future, as many agencies reported planning to begin or expand the use of IoT. However, 13 agencies not using IoT technologies reported they did not plan to use the technologies for a range of reasons, including insufficient return on investment.

Surveyed agencies most frequently reported increasing data collection (45 of 74), and increasing operational efficiency (43 of 74) as benefits of using IoT technologies. Increasing data collection can aid decision-making and support technology development; increased efficiencies may allow agencies to accomplish more with existing resources. According to EPA officials, sensors are able to transmit data eliminating the need for employees to visit sites to collect data. The Saint Lawrence Seaway Development Corporation reported that IoT technologies helped improve transit times through its locks. Agencies most frequently reported cybersecurity issues (43 of 74) and interoperability (30 of 74) as the most significant challenges to adopting IoT technologies. For example, the Transportation Security Administration's officials told us they could not ensure the security and privacy of passenger information and subsequently took its network-connected security equipment offline until they developed a solution.

Most agencies' officials responding to GAO's survey (54 of 72), as well as officials interviewed as part of the case studies, reported using information technology (IT) policies developed by their agency, versus internal IoT-specific policies, to manage IoT technologies. Some agencies reported their IT policies were sufficient for the current challenges and risks associated with adopting IoT technologies, including cybersecurity. The Office of Management and Budget's officials stated they do not typically make policies for specific IT components but if needed would work with the National Institute of Standards and Technology and others to develop such policies.

IoT generally refers to devices—from sensors in vehicles to building thermostats— that collect information, communicate it to a network, and may complete a task based on that information. Although IoT technologies may present an opportunity for the federal government to operate more efficiently and effectively, federal agencies may also face challenges in acquiring and using IoT.

GAO was asked to review the federal government's experience with IoT. This report describes (1) IoT technologies selected federal agencies are using, (2) the benefits and challenges of using IoT technologies, and (3) policies and guidance selected agencies follow in using and acquiring IoT technologies. GAO surveyed 115 Chief Information Officers (CIO) and senior IT officials at federal agencies and subcomponents based on, in part, agency membership in the federal CIO Council; 90 responded. However, not all agencies replied to each question. GAO also selected the Department of Commerce, the Department of Homeland Security, EPA, and the National Aeronautics and Space Administration as case studies. GAO selected these agencies based on, among other things, their fiscal year 2020 IT budgets and examples of IoT use from literature. For each case study, GAO reviewed documents and interviewed officials from the Office of the CIO from the agency and officials from selected sub-components that use the IoT technologies.

The Internet of Things (video)