Some of the law enforcement agencies without direct access may be underutilizing these reports—to the detriment of their investigations.

We recommended that FinCEN develop policies and procedures to promote greater law enforcement use of Bank Secrecy Act reports. 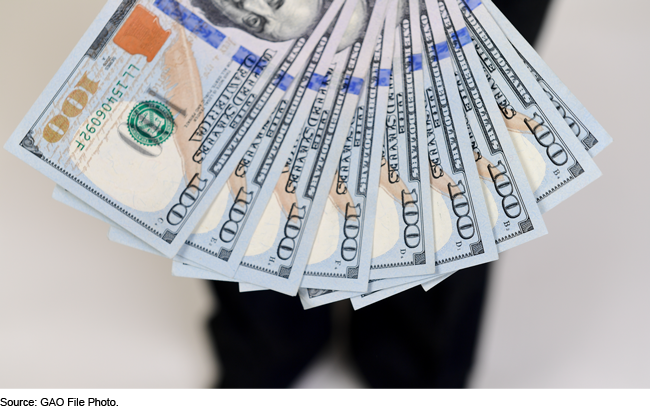 Many federal, state, and local law enforcement agencies use Bank Secrecy Act (BSA) reports for investigations. A GAO survey of six federal law enforcement agencies found that more than 72 percent of their personnel reported using BSA reports to investigate money laundering or other crimes, such as drug trafficking, fraud, and terrorism, from 2015 through 2018. According to the survey, investigators who used BSA reports reported they most frequently found information useful for identifying new subjects for investigation or expanding ongoing investigations (see figure). 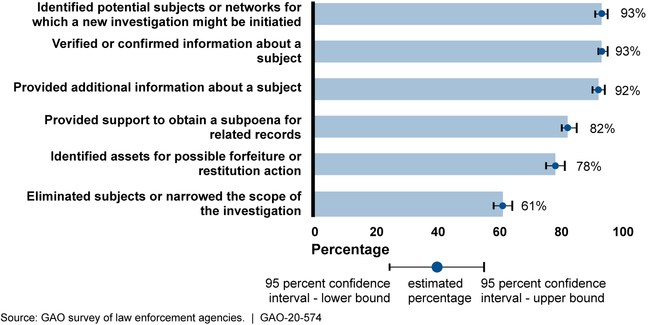 Notes: GAO conducted a generalizable survey of 5,257 personnel responsible for investigations, analysis, and prosecutions at the Drug Enforcement Administration, Federal Bureau of Investigation, Homeland Security Investigations, Internal Revenue Service-Criminal Investigation, Offices of U.S. Attorneys, and U.S. Secret Service. The margin of error for all estimates is 3 percentage points or less at the 95 percent confidence interval.

GAO reviewed a nongeneralizable sample of 11 banks that varied in terms of their total assets and other factors, and estimated that their total direct costs for complying with the BSA ranged from about $14,000 to about $21 million in 2018. Under the BSA, banks are required to establish BSA/anti-money laundering compliance programs, file various reports, and keep certain records of transactions. GAO found that total direct BSA compliance costs generally tended to be proportionally greater for smaller banks than for larger banks. For example, such costs comprised about 2 percent of the operating expenses for each of the three smallest banks in 2018 but less than 1 percent for each of the three largest banks in GAO's review (see figure). At the same time, costs can differ between similarly sized banks (e.g., large credit union A and B), because of differences in their compliance processes, customer bases, and other factors. In addition, requirements to verify a customer's identity and report suspicious and other activity generally were the most costly areas—accounting for 29 and 28 percent, respectively, of total compliance costs, on average, for the 11 selected banks.

Federal banking agencies routinely examine banks for BSA compliance. FinCEN data indicate that the agencies collectively cited about 23 percent of their supervised banks for BSA violations each year in their fiscal year 2015–2018 examinations. A small percentage of these violations involved weaknesses in a bank's BSA/anti-money laundering compliance program, which could require the agencies by statute to issue a formal enforcement action.

Stakeholders had mixed views on industry proposals to increase the BSA's dollar thresholds for filing currency transaction reports (CTR) and suspicious activity reports (SAR). For example, banks must generally file a CTR when a customer deposits more than $10,000 in cash and a SAR if they identify a suspicious transaction involving $5,000 or more. If both thresholds were doubled, the changes would have resulted in banks filing 65 percent and 21 percent fewer CTRs and SARs, respectively, in 2018, according to FinCEN analysis. Law enforcement agencies told GAO that they generally are concerned that the reduction would provide them with less financial intelligence and, in turn, harm their investigations. In contrast, some industry associations told GAO that they support the changes to help reduce BSA compliance costs for banks.

Money laundering and terrorist financing pose threats to national security and the U.S. financial system's integrity. The BSA requires financial institutions to file suspicious activity and other reports to help law enforcement investigate these and other crimes. FinCEN administers the BSA and maintains BSA reports in an electronic database that can be searched to identify relevant reports. Some banks cite the BSA as one of their most significant compliance costs and question whether BSA costs outweigh its benefits in light of limited public information about law enforcement's use of BSA reports.

GAO is recommending that FinCEN develop written policies and procedures to promote greater use of BSA reports by law enforcement agencies without direct database access. FinCEN concurred with GAO's recommendation.