TSA tests its screening technologies before installing them at airports to ensure that they are detecting certain dangerous items as intended.

But screening technologies can become less effective over time, and we found that TSA does not continue to fully test them once they are installed. Some airport equipment that detects trace explosives or tests bottled liquids wasn’t performing as intended when the Department of Homeland Security evaluated it in 2015 and 2016.

We recommended that TSA ensure that its screening technologies continue to meet requirements after they are installed at airports. 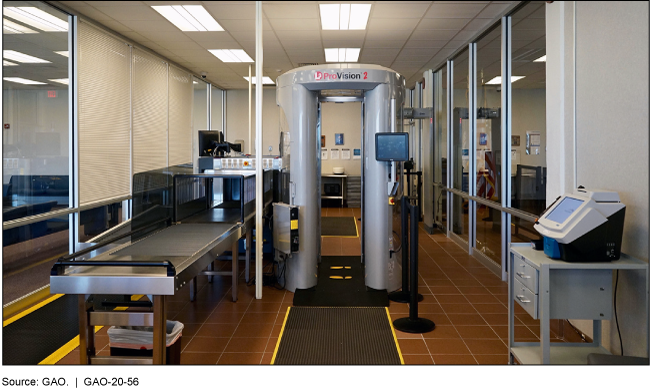 The Department of Homeland Security's (DHS) Transportation Security Administration (TSA) operationalizes, or puts into effect, detection standards for its screening technologies by acquiring and deploying new technologies, which can take years. Detection standards specify the prohibited items (e.g., guns, explosives) that technologies are to detect, the minimum rate of detection, and the maximum rate at which technologies incorrectly flag an item. TSA operationalizes standards by adapting them as detection requirements, working with manufacturers to develop and test new technologies (software or hardware), and acquiring and deploying technologies to airports. For the standards GAO reviewed, this process took 2 to 7 years, based on manufacturers' technical abilities and other factors.

TSA's deployment decisions are generally based on logistical factors and it is unclear how risk is considered when determining where and in what order technologies are deployed because TSA did not document its decisions. TSA considers risks across the civil aviation system when making acquisition decisions. However, TSA did not document the extent risk played a role in deployment, and could not fully explain how risk analyses contributed to those decisions. Moving forward, increased transparency about TSA's decisions would better ensure that deployment of technologies matches potential risks.

TSA is responsible for overseeing security operations at roughly 440 TSA-regulated airports as part of its mission to protect the nation's civil aviation system. TSA uses technologies to screen passengers and their bags for prohibited items.

GAO reviewed DHS and TSA procedures and documents, including detection standards; visited DHS and TSA testing facilities; observed the use of screening technologies at seven airports, selected for varying geographic locations and other factors; and interviewed DHS and TSA headquarters and field officials.