Coast Guard regulations require tankers and other large vessels to have plans for responding to incidents that caused or could cause an oil spill. Plans must identify response resources, such as the equipment needed for spill cleanup, salvage, and firefighting.

However, we found that the Coast Guard has only verified the accuracy of the salvage and firefighting information in 71 of over 3,000 of these plans.

The Coast Guard has started to collect data on whether these plans were followed in past incidents. We made 2 recommendations, including that the Coast Guard use incident data to improve how it reviews these plans. 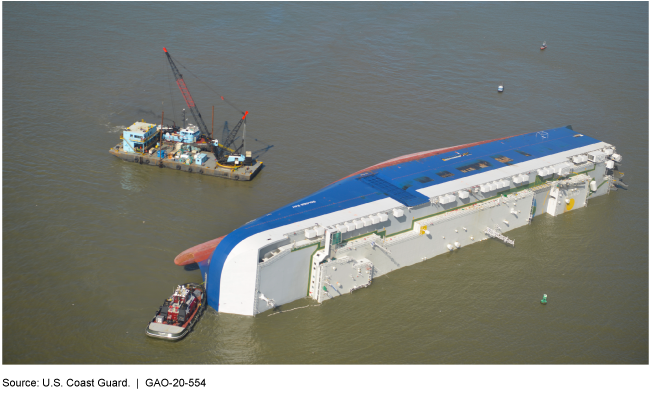 The U.S. Coast Guard's (Coast Guard) processes for reviewing and approving vessel response plans (VRPs) assess whether they comply with regulatory requirements and have contracts in place for response resource providers, such as oil spill removal, and salvage and marine firefighting services. GAO and industry stakeholders identified risks in the Coast Guard's processes such as the

For example, industry stakeholders stated that some subcontracts with salvage and marine firefighting resources provide that the subcontracted vessels are obligated to respond “as available,” raising questions as to whether they are committed to respond to an incident. A senior Coast Guard attorney told GAO that such subcontracts are inconsistent with the VRP regulations. However, in its VRP reviews, the Coast Guard does not review subcontracts. Coast Guard officials stated that they are developing guidance for reviewing subcontracts and to clarify that equipment cannot be included on an “as available” basis. These officials also stated that they have the authority to do more to assess VRPs and in April 2018 began collecting incident data and reviewing whether VRPs were followed in each incident. However, this effort does not fully analyze these data to determine whether or how its review processes could be strengthened. By doing so, the Coast Guard could help mitigate identified risks in the processes and provide greater assurance of the efficacy of VRPs for ensuring oil spill or marine firefighting responses.

The Coast Guard's processes for reviewing requests to use alternative planning criteria (APC) is based on federal regulations and national guidelines, and also largely relies on the professional judgment of field personnel and local guidance and tools to determine whether requests meet regulatory requirements. However, Coast Guard and maritime industry officials cited several challenges, including a lack of clarity about how proposed APC measures designed to prevent incidents are to be evaluated, as well as the impact of its military personnel rotations on the consistency of APC reviews. Under Coast Guard policy, military personnel rotate in and out of locations on a regular basis, and 12 of the 18 non-Coast Guard stakeholders GAO spoke with cited personnel rotation as a key concern given the associated loss of experience and local expertise. In October 2019, the Coast Guard created an advisory group to identify solutions to challenges faced by the VRP Program, including those for APC. However, the Coast Guard did not initiate the advisory group using key program management practices, such as establishing milestones, roles and responsibilities, and the methods for how the group is to carry out its work. By adopting such program management practices, the Coast Guard's advisory group would be better positioned to successfully address challenges identified in the VRP review and approval process.

Pursuant to the Oil Pollution Act of 1990, the Coast Guard issued regulations requiring tankers and other large vessels to develop VRPs that identify the resources that would respond to an oil spill, including a spill resulting from a fire or explosion. The Coast Guard reviews VRPs against certain regulatory requirements, such as time frames for response. In remote locations with limited response resources, those seeking VRP approvals may request to use APC for responses instead.

The Coast Guard Authorization Act of 2018 included a provision for GAO to review the VRP program. This report examines the Coast Guard's processes for assessing (1) VRPs against regulations and (2) requests for use of APC. GAO reviewed VRP regulations and guidance, analyzed VRP-related data, and interviewed Coast Guard personnel, and industry officials—selected based on geographic location and to obtain a variety of different perspectives. Information from these entities is nongeneralizable, but provides insight into VRP processes.