GAO follows protocols that dictate how we work with the federal agencies that we audit. For example, agencies should assist us in scheduling an initial meeting (an entrance conference) within 14 calendar days of receiving notice that we are about to begin a new audit.

In previous years, the Department of Defense has had trouble meeting these deadlines. However, we began 49 new audits involving DOD during the second quarter of fiscal year 2020, and DOD scheduled 45 initial meetings by the required deadline.

In addition, DOD communicated with us in a timely manner about unavoidable delays in scheduling the rest of the meetings. 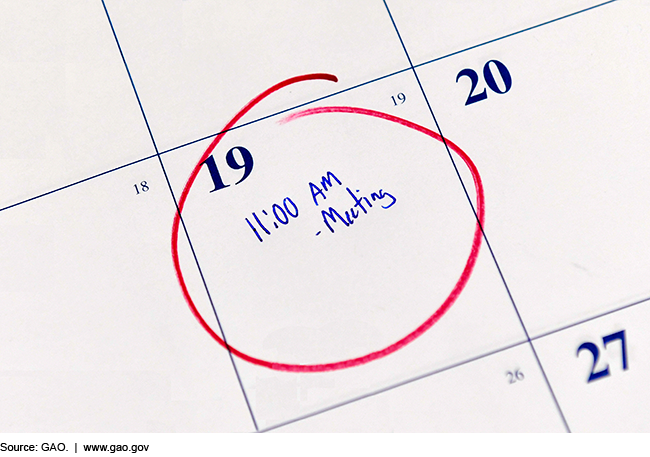 GAO began 49 new audits that involved the Department of Defense (DOD) in the second quarter of fiscal year 2020. DOD generally scheduled entrance conferences (initial meetings between agency officials and GAO staff) for those audits within 14 days of GAO's notification of the audit, and held the conferences within 30 days. These initial meetings allow GAO to communicate its audit objectives and enable agencies to assign key personnel to support this work.

Of GAO's 49 requested entrance conferences, 45 were scheduled within 14 days of notification and four were scheduled more than 14 days after notification. DOD officials stated that two of these four conferences were scheduled late due to difficulties in identifying a primary action officer or aligning the schedules of DOD and GAO officials. A third was not scheduled because DOD and GAO mutually agreed to postpone the audit due to the COVID-19 pandemic's limiting access to classified resources needed for the audit's work. Finally, GAO requested a pause in scheduling the fourth conference upon learning that the DOD Office of Inspector General had similar work underway.

In Senate Report 116-48 accompanying a bill for the National Defense Authorization Act for Fiscal Year 2020, the Senate Armed Services Committee included a provision for GAO to review DOD's scheduling and holding of entrance conferences. This report evaluates the extent to which DOD scheduled entrance conferences within 14 days, consistent with GAO's agency protocols, and also held those conferences within 30 days. This is the second of four reports that we will produce on this topic for fiscal year 2020.