CBP developed health screening policies and received emergency funds to enhance detainees’ medical care. But CBP hasn’t consistently overseen these policies, so some children were not given health screenings as intended. Further, CBP violated appropriations law by using some of these funds for items such as its canine program. CBP also lacks reliable data on deaths and didn’t report this data to Congress as directed.

We made 10 recommendations to address these issues. 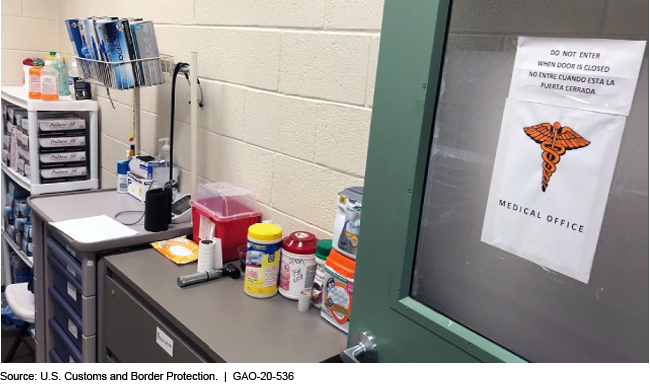 As of May 2020, U.S. Customs and Border Protection (CBP) within the Department of Homeland Security (DHS) had obligated nearly $87 million of the approximately $112 million it received specifically for consumables and medical care in a 2019 emergency supplemental appropriations act. CBP obligated some of these funds for consumable goods and services, like food and hygiene products, as well as medical care goods and services such as defibrillators, masks, and gloves. However, CBP obligated some of these funds for other purposes in violation of appropriations law. For example, CBP obligated some of these funds for goods and services for its canine program; equipment for facility operations like printers and speakers; transportation items that did not have a primary purpose of medical care like motorcycles and dirt bikes; and facility upgrades and services like sewer system upgrades.

GAO identified two factors that contributed to CBP's violations—insufficient guidance to CBP offices and components before obligations were made, and a lack of oversight roles and responsibilities for reviewing obligations once made.

Until CBP develops and implements additional guidance, and establishes oversight roles and responsibilities, the agency does not have assurance that the remainder of funds appropriated for consumables and medical care—about $25 million as of May 2020—will be obligated consistent with the purpose of the funds.

CBP took various steps to enhance medical care and services for individuals in its custody, including, among other things, increasing its use of contracted medical providers (see figure on the next page), issuing new health screening policies, and requesting the Centers for Disease Control and Prevention assess conditions and make recommendations for the reduction of influenza in its facilities. In particular, in January 2019 CBP issued an interim directive which, among other things, required health interviews and medical assessments for certain individuals in its custody. CBP updated this directive in December 2019 and issued corresponding implementation plans in March 2020.

GAO identified gaps related to CBPs implementation and oversight of its medical care efforts. For example:

CBP does not have reliable information on deaths, serious injuries, and suicide attempts and has not consistently reported deaths of individuals in custody to Congress. CBP officials attributed this to several reasons, including that CBP's directive on significant incident reporting does not include a definition of suicide attempts and its automated reporting system does not have categories specific to serious injuries or suicide attempts. Instead, these incidents are classified together with less serious incidents and included as general “injuries or illnesses” in reports to senior leadership. Without additional field guidance and updates to its reporting system, CBP will continue to lack reliable information on the number of incidents that occur in its custody. Further, from fiscal year 2014 through fiscal year 2019, CBP was directed to report on deaths of individuals in its custody to Congress. GAO's review of CBP documentation and reports to Congress showed that 31 individuals died in custody along the southwest border from fiscal years 2014 through 2019, but CBP documented only 20 deaths in its reports. Ensuring that deaths in custody are reported to Congress and documented appropriately would help CBP improve transparency with Congress.

Three children died in CBP custody between December 2018 and May 2019, prompting questions about CBP's medical care for those in its custody. In July 2019, an emergency supplemental appropriations act was enacted, providing additional funds to CBP, including funds for consumables and medical care.

To conduct this audit GAO reviewed CBP documentation, including financial reports; directives, policies, and training related to screening individuals for medical issues; and directives and policy documentation on reporting deaths in custody. GAO interviewed CBP officials in headquarters and two field locations, and observed medical efforts in facilities in field locations, selected on the basis of volume of apprehensions.

GAO is making 10 recommendations to CBP, including to:

DHS concurred with all 10 recommendations.