Over 37,000 people were killed in traffic accidents on U.S. highways in 2017. The U.S. Department of Transportation provides about $3 billion a year to states to improve traffic safety. To determine whether the federal money is being spent effectively, states are supposed to set safety targets and report on whether their projects helped achieve them.

States did not achieve most of their fatality reduction targets from 2014-2017. Nearly half did not provide their most recent required assessments of fatality targets.

We recommended that Transportation clarify state reporting requirements and report to Congress whether states are meeting targets. 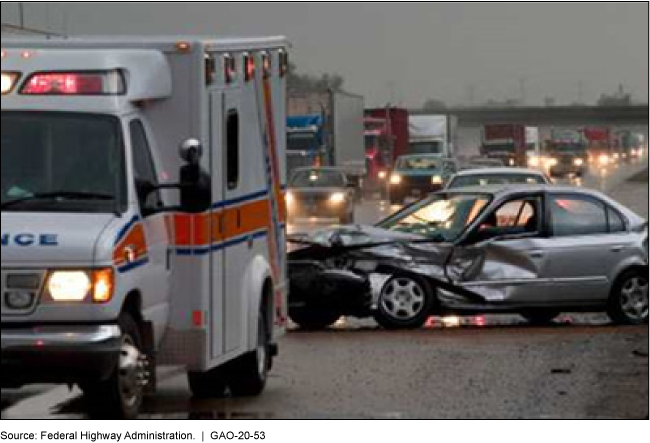 From 2014 through 2017, states did not achieve most of the fatality-related targets they set under the National Highway Traffic Safety Administration's (NHTSA) performance management framework (see table), and the number of serious injury targets states achieved during this period is unclear. GAO did not assess whether states achieved targets they set under the Federal Highway Administration's (FHWA) framework because the data were not yet available. State officials we interviewed said that achieving fatality targets may depend on factors outside their control, such as demographic, economic, and legislative changes. GAO's analysis of states' reports showed that nearly half of states did not provide the required assessment of progress to NHTSA on their most recent set of fatality targets. While NHTSA has taken steps to improve its review of these reports, officials acknowledged states are not clear on which target years to assess. Further, NHTSA lacks a mechanism to report whether states eventually achieve these targets. As a result, NHTSA and other stakeholders have limited insight into the results states have achieved from their use of federal safety funds. The extent to which states achieved serious injury targets is unclear because states have changed their definitions of serious injury over time. To ensure the consistency of these data, NHTSA and FHWA established a standard definition for reporting serious injuries, which states are in the process of adopting.

Note: States include the 50 states, the District of Columbia, and Puerto Rico.

In a survey that GAO administered, officials from a majority of states said that performance measures informed how they selected projects under NHTSA's framework. GAO found, however, that in the 2019 plans submitted by states to NHTSA, less than a third of states reported how performance targets and funded projects were linked. Since the submission of those plans, NHTSA has provided training and guidance to its staff to ensure future plans will more clearly identify these links. Under FHWA's framework, about one-third of states reported in GAO's survey that performance measures influenced their project selection; the remaining two-thirds reported using an alternative data-driven approach, such as cost-benefit analysis. FHWA officials said they are developing guidance to help states integrate performance measures and targets into methods that states are currently using to select highway safety projects.

Over 37,000 people were killed in traffic crashes on the nation's highways in 2017. Within the U.S. Department of Transportation (DOT), two agencies—NHTSA for behavioral factors and FHWA for highway infrastructure—provide about $3 billion annually to states for programs to improve traffic safety. To ensure that states are held accountable for these funds, NHTSA and FHWA developed performance management frameworks that require states to use performance measures and targets in tracking traffic fatalities and serious injuries.

GAO was asked to review NHTSA's and FHWA's traffic safety performance management frameworks. This report examines the extent to which: (1) states have met fatality and serious injury targets, and NHTSA's and FHWA's approaches to assessing states' achievements, and (2) states have used performance measures and targets to make traffic safety funding decisions. GAO analyzed state-reported targets and NHTSA data from 2014 through 2017—the most recent data available—for all 50 states, the District of Columbia, and Puerto Rico; surveyed these states on the use of performance measures and targets; reviewed requirements in NHTSA's and FHWA's frameworks; and interviewed officials from NHTSA, FHWA, and 10 states, selected to obtain a mix of population sizes, geographic locations, and other factors.

GAO recommends that NHTSA (1) provide additional direction and clarification to ensure states assess and report progress in meeting fatality targets, and (2) report on states' final achievement of targets. DOT concurred with the recommendations.