Army and Marine Corps special operations and reconnaissance forces use free fall parachutes to navigate and covertly land in contested areas. These parachute systems have a service life of about 12-15 years.

The Army and Marine Corps plan to spend about $150 million to replace their aging systems with ones better suited for their unique missions. Both services had similar contracting strategies and bought existing parachute systems that met their needs with only minor modifications.

The Army’s and Marine Corps’ operational needs—such as how far they needed the parachutist to travel—led them to buy separate systems with different features. 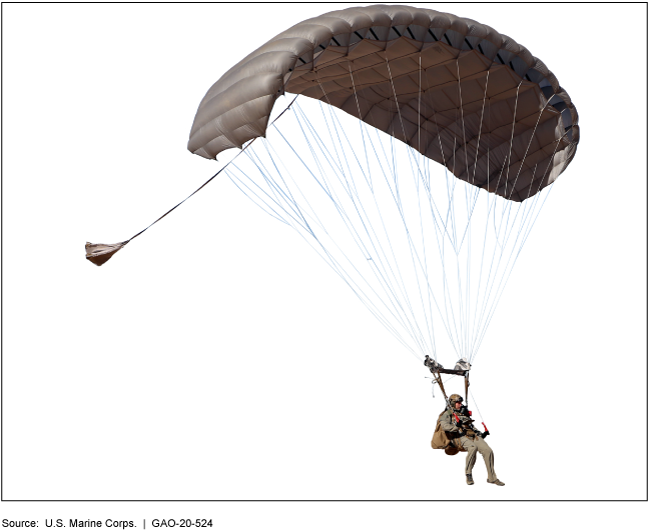 The Army and Marine Corps use free fall parachutes with their special operations forces and reconnaissance units to covertly land personnel in contested areas. Both services used low-risk acquisition strategies for their parachute replacement programs that were based on buying existing systems that could meet their needs with minor modifications and no government-funded development. But, according to GAO's review of program documents, their requirements differed in several areas, which helps explain why they chose different systems to fulfill their needs. For example, the Marine Corps' need for a small drogue parachute (see Marine Corps system on right side of figure below) differentiated it from the Army. A drogue parachute helps prevent “head over heels” tumbling, which was a contributing factor in previous Marine Corps parachuting fatalities. According to the Marine Corps, the added in-flight stability from a drogue parachute also helps because the Marine Corps has more limited training opportunities than the Army. The Army system on the left does not incorporate a drogue parachute, which results in a simpler design and lower-cost parachute system.

According to GAO's review of program documents, the Army and the Marine Corps are meeting the current acquisition goals for their free fall parachute programs. Specifically:

Cost: The Army's program costs have been stable since 2013 when it revised its cost goals to account for an increase in planned parachute purchases. The Marine Corps' program has met its cost goals, and has largely addressed a $1.4 million budget shortfall, which will enable it to buy nearly all of its planned parachutes.

Schedule: The Army's program is nearing completion, having met its schedule goals. The Marine Corps' program met its one schedule milestone by fielding its initial parachutes almost 2 years earlier than planned. The Marine Corps plans to complete its program in fiscal year 2025.

Performance: The Army's and Marine Corps' parachutes both met all of their minimum performance goals, such as the distances they can travel and the weights they can carry.

Combined, the Army and the Marine Corps expect to spend almost $150 million to replace thousands of aging free fall parachute systems with higher performing ones better suited for current threats. Free fall parachute systems allow military personnel to deploy a parachute during descent and then navigate to a designated landing area. Each service has awarded contracts for its new parachute system. The Army awarded its contract for the Advanced Ram Air Parachute System—known as the RA-1—in 2011. The Marine Corps awarded its contract for the Enhanced-Multi Mission Parachute System—now called the PS-2—in 2018.

GAO analyzed program and contract documentation for the Army's RA-1 and the Marine Corps' PS-2 acquisition programs and interviewed or obtained information from relevant officials from the Army, Marine Corps, and prime contractor for both programs.