FTA’s role is to evaluate and rate projects based on statutory criteria and make recommendations to Congress. Those seeking grants must follow a multi-step, multi-year development process during which FTA reviews information about the project.

FTA could make its review process more transparent and effective, such as by clearly specifying the factors it considers. We made 3 recommendations, including that FTA clarify its review methods and criteria.

A project extending commuter rail services in California is one of many projects that has received Federal Transit Administration Capital Investment Grants program funding. 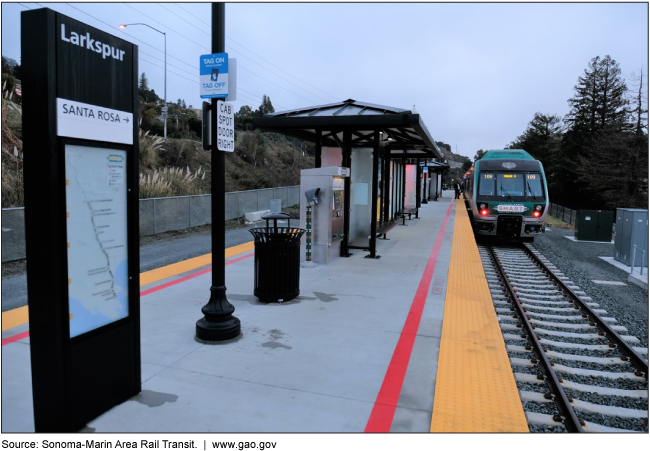 Sponsors of most of the 66 projects in the Federal Transit Administration's (FTA) Capital Investment Grants program told GAO that they have experienced delays moving through at least one aspect of the program's development process. This program is a significant source of federal financial assistance that transit agencies across the United States can use to build new transit systems or extend existing service. Projects compete for funding, and FTA's role is to evaluate and rate projects based on statutory criteria and make recommendations to Congress. Based on GAO's analysis, the causes of delays sponsors reported experiencing during the program's development process were frequently factors unique to each project or local in nature, such as challenges completing agreements with local utility companies or other rail operators.

FTA's policies and practices for the Capital Investment Grants program do not fully align with three practices GAO has previously identified that federal agencies should follow to help ensure the effectiveness and transparency of their reviews. FTA officials told GAO the agency takes steps to help sponsors understand the agency's review processes and the factors that affect FTA's reviews. However, GAO found that some sponsors reported aspects of FTA's reviews confusing or expected FTA to take action sooner than may be reasonable. The practices with which FTA's policies and actions do not fully align include:

Using a standards-based approach includes clearly specifying the methods an agency uses and the factors it considers when performing its reviews. GAO found that FTA provides sponsors with information that describes how it administers the Capital Investment Grants program and performs its reviews. However, based on GAOs' review of FTA documentation and interviews with sponsors, FTA does not always provide sponsors with information that clearly describes some of its methods, such as how it uses documents to help sponsors advance through the development process, or the timeframes for FTA's review and response to sponsors.

Documenting review processes and results includes communicating the results of agency decisions in a timely manner. GAO found that FTA documents its reviews but, according to several sponsors, did not always communicate decisions to sponsors in a timely manner, taking weeks, months, or longer. Some sponsors also told GAO that they thought FTA was sometimes reluctant to communicate certain decisions, such as the reason why their project was not advancing, to them in writing.

Incorporating public involvement helps position agencies to be better prepared to address issues that might affect their reviews. GAO found that FTA's current approach to incorporating public involvement largely relies on informal mechanisms, such as meeting with sponsors at industry conferences and workshops, and that FTA has used a more formal mechanism in the past to solicit public comment. While FTA's approach has benefits, some sponsors told GAO that the frequency of meetings has varied over the years or that there were limitations with FTA's approach as not all sponsors attend those meetings.

FTA's Capital Investment Grants program helps fund investments in public transit in the United States. To be considered for funding through the program, sponsors of projects, such as investments in rail transit, must complete a multi-step, multi-year development process outlined in statute and meet FTA requirements.

The Moving Ahead For Progress in the 21st Century Act includes a provision for GAO to biennially review FTA's implementation of this program. This report discusses: (1) the extent to which, if at all, sponsors reported experiencing delays moving through the program's development process and (2) the extent to which FTA's policies and practices for the program help ensure the effectiveness and transparency of FTA's reviews. GAO reviewed relevant laws and FTA guidance and compared FTA's policies and practices with three systematic practices that help ensure the effectiveness and transparency of agency reviews. GAO also interviewed FTA officials and the sponsors of the 66 projects in the program as of February 2018.

GAO recommends that FTA take steps to: (1) clarify aspects of the methods it uses and factors it considers when reviewing projects, (2) review agency guidance to identify aspects that may be outdated or confusing, and (3) communicate information, such as the reason why a project is not advancing, to sponsors in a timely manner. FTA concurred with reviewing agency guidance but disagreed with the other recommendations, stating additional action is not needed for such purposes. But GAO believes FTA needs further action to help ensure the effectiveness and transparency of its reviews.