In 2017 and 2018, wildfires in California killed 159 people and destroyed more than 32,000 structures, including many homes. In response, the Federal Emergency Management Agency put about $2 billion toward housing, debris removal, and other assistance.

FEMA reviewed its performance but could more broadly assess how its policies and procedures work for large-scale fires. We recommended such an assessment. 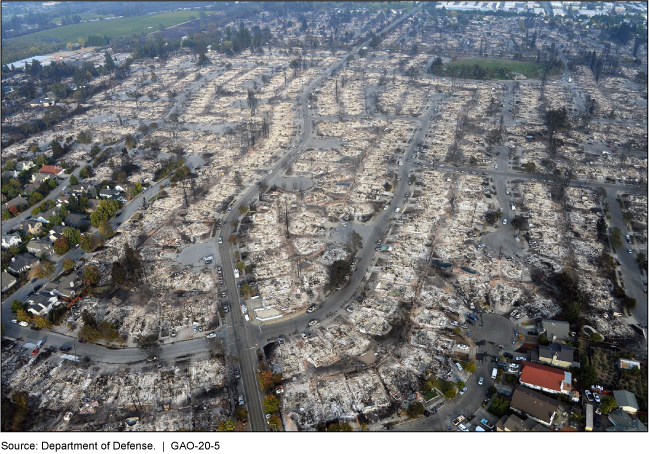 For wildfire-related major disaster declarations from 2015 through 2018, the Federal Emergency Management Agency (FEMA)—consistent with its authorities and responsibilities—helped state and local officials obtain and coordinate federal resources to provide for the needs of wildfire survivors and execute recovery efforts. This support totalled over $2.4 billion and included providing staff to assist at Emergency Operations Centers and establishing Disaster Recovery Centers to coordinate disaster assistance services for survivors. In addition, FEMA provided Public Assistance grant funds to local jurisdictions to help address community infrastructure needs, such as debris removal. FEMA also assigned federal agencies to perform various missions to help with response and recovery—for example, the U.S. Army Corps of Engineers was assigned with contracting for debris removal services in some instances.

Officials from jurisdictions that GAO spoke with described practices that aided in wildfire response and recovery, but also reported experiencing challenges. Specifically, officials in affected areas noted that collaboration between FEMA and California's Office of Emergency Services allowed for timely information sharing, and FEMA's assistance at Disaster Recovery Centers greatly assisted survivors in obtaining necessary services. Among the challenges cited were onerous documentation requirements for FEMA's Public Assistance grant program and locating temporary housing for survivors whose homes were completely destroyed. In addition, the unique challenge of removing wildfire debris led to confusion over soil excavation standards and led to overexcavation on some homeowners' lots, lengthening the rebuilding process.

FEMA has developed an after-action report identifying lessons learned from the October and December 2017 wildfires, but could benefit from a more comprehensive assessment of its operations to determine if additional actions are needed to ensure that policies and procedures are best suited to prepare for future wildfires. The combination of recent devastating wildfires and projections for increased wildfire activity suggest a potential change in FEMA's operating environment. According to Standards for Internal Control in the Federal Government , such changes should be analyzed and addressed to help ensure that agencies maintain their effectiveness.

In 2017 and 2018, deadly wildfires struck the state of California, tragically resulting in 159 deaths and over 32,000 structures destroyed. FEMA, as the lead federal agency for responding to and recovering from disasters, has obligated about $2 billion in housing, debris removal, and other assistance following these disasters. According to recent environmental assessments, fire seasons are increasing in length, putting more people and infrastructure at risk.

GAO was asked to assess a range of response and recovery issues related to the 2017 disasters. Specifically, this report addresses (1) the assistance FEMA provided to jurisdictions in response to major disaster declarations stemming from wildfires from 2015 through 2018, (2) selected jurisdictions' perspectives on FEMA wildfire response and recovery efforts, and (3) the extent to which FEMA has identified and addressed key lessons learned. GAO obtained data on FEMA wildfire disaster assistance and statistics on fire damages and fatalities; reviewed key documentation, such as incident action plans and after action reports; and interviewed officials from FEMA headquarters and regional offices, states, and a nonprobability sample of affected local jurisdictions (e.g., counties).

GAO recommends that FEMA comprehensively assess operations to identify additional updates to policies and procedures that could enhance future wildfire response and recovery efforts. The Department of Homeland Security agreed with our recommendation.

Podcast Roundup – Podcasts You May Have Missed