School districts spend billions of dollars a year on building and renovating facilities at the nearly 100,000 K-12 public schools nationwide. We surveyed districts and states about common school facilities’ issues and priorities.

about half of districts needed to update or replace multiple systems like heating, ventilation, and air conditioning (HVAC) or plumbing 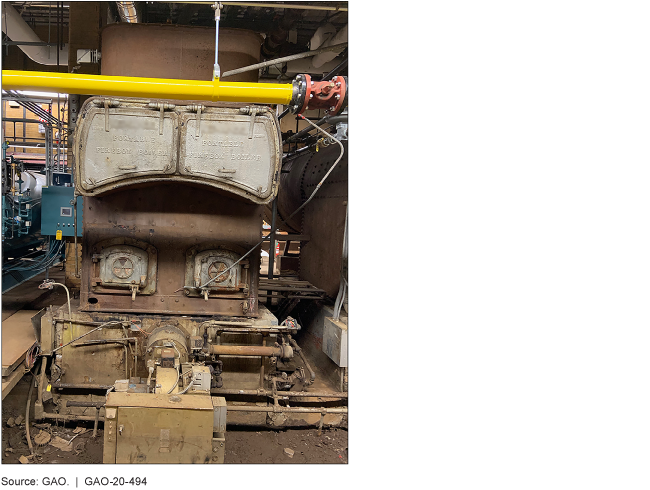 About half (an estimated 54 percent) of public school districts need to update or replace multiple building systems or features in their schools, according to GAO's national survey of school districts. For example, an estimated 41 percent of districts need to update or replace heating, ventilation, and air conditioning (HVAC) systems in at least half of their schools, representing about 36,000 schools nationwide that need HVAC updates (see figure). In about half of the 55 schools GAO visited in six states, officials described HVAC-related problems, such as older systems that leaked and damaged flooring or ceiling tiles. If not addressed, such problems can lead to indoor air quality problems and mold, and in some cases caused schools to adjust schedules temporarily. To determine the condition of their school facilities, an estimated two-thirds of districts conducted a facilities condition assessment at least once in the last 10 years. According to GAO's survey of the 50 states and District of Columbia, most states do not conduct statewide assessments to determine school facilities' needs and instead leave this task to school districts.

Note: GAO administered the survey from August to October 2019. Thin bars in the chart display the 95 percent confidence interval for each estimate.

School districts' highest priorities for their school facilities were improving security (an estimated 92 percent), expanding student access to technology (87 percent), and monitoring health hazards (78 percent), according to GAO's school district survey. In school districts GAO visited, officials said they first address health hazards and safety issues. In nearly all districts GAO visited, security also had become a top priority, with some districts prioritizing security updates over replacing building systems, such as HVAC. In about half of districts nationwide, funding for school facilities primarily came from local sources such as property taxes, based on GAO's survey. High-poverty districts more commonly relied on state funding and used property taxes less commonly than low-poverty districts. According to GAO's state survey, 36 states provided capital funding to school districts for school construction or renovations, including five of the six states GAO visited, though the funding amounts and mechanisms differed considerably within and across states.

This report examines (1) the common facility condition issues school districts identify in public schools and how they have done so and (2) school districts' highest priorities for their school facility renovations and updates, and how districts and states fund them.