For 3 decades, citizens of Micronesia, the Marshall Islands, and Palau have been able to live and work in the U.S. indefinitely without a visa through special agreements called compacts. The number of people who migrate to the U.S. under the auspices of these compacts has grown by about 70% in the last decade, particularly on the mainland.

U.S. areas reported rising costs of public education and health care programs and services for these migrants. Though these populations generally aren’t eligible for federal programs such as Medicaid, some states have found ways to use federal funding to help cover their health insurance premiums.

Twenty U.S. States and Territories Are Home to At Least 1,000 Migrants from Countries with Compacts of Free Association 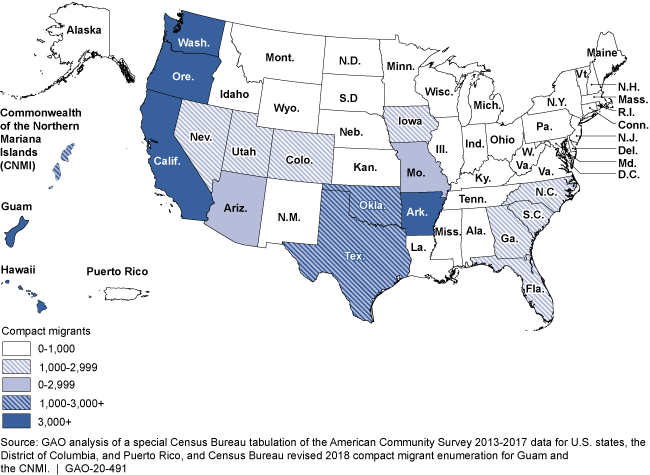 U.S. map with states shaded to indicate number of migrants from countries with compacts in each state

More than 94,000 compact migrants—that is, citizens of the Federated States of Micronesia (Micronesia), the Republic of the Marshall Islands (Marshall Islands), and the Republic of Palau (Palau) as well as their U.S.-born children and grandchildren younger than 18 years—live and work in the United States and its territories, according to Census Bureau data. Data from Census Bureau surveys covering the periods 2005-2009 and 2013-2017 and an enumeration in 2018 show that the combined compact migrant populations in U.S. areas grew by an estimated 68 percent, from about 56,000 to about 94,000. Historically, many compact migrants have lived in Hawaii, Guam, and the Commonwealth of the Northern Mariana Islands (CNMI). From 2013 to 2018, an estimated 50 percent of compact migrants lived on the U.S. mainland.

Hawaii, Guam, and the CNMI track and report the financial costs related to compact migration, or compact impact, for their state or territory. These areas reported estimated costs totaling $3.2 billion during the period fiscal years 2004 through 2018. In fiscal years 2004 through 2019, Hawaii, Guam, and the CNMI received a combined total of approximately $509 million in federal grants to help defray the costs of providing services to compact migrants.

In the U.S. areas GAO visited—Arkansas, the CNMI, Guam, Hawaii, Oregon, and Washington—state and territorial officials identified effects of providing public education and health care services to compact migrants. Some area governments use a combination of federal and state or territorial funds to extend health care coverage to compact migrants. For example, some states help compact migrants pay for coverage through health insurance exchanges, created under the 2010 Patient Protection and Affordable Care Act, by covering the cost of premiums not covered by advanced premium tax credits available to eligible compact migrants. Effects of compact migration in these U.S. areas also include compact migrants' budgetary contributions through payment of taxes and fees as well as their workforce contributions—for example, through jobs in hotels, manufacturing, the U.S. military, poultry processing, caregiving, and government.

The U.S. compacts of free association permit eligible citizens from the freely associated states (FAS), including Micronesia, the Marshall Islands, and Palau, to migrate to the United States and its territories without visa and labor certification requirements. In fiscal year 2004, Congress authorized and appropriated $30 million annually for 20 years to help defray costs associated with compact migration in affected jurisdictions, particularly Hawaii, Guam, and the CNMI. This funding ends in 2023, though migration to U.S. areas is permitted to continue and is expected to grow.

In commenting on a draft of this report, U.S. area governments and FAS Ambassadors to the United States identified areas for additional study related to compact migration and impact. Some also discussed policy considerations, including restoration of Medicaid benefits to compact migrants.