The extensive planning, production, and execution of these events involves resources from multiple federal agencies and state and local jurisdictions for security and medical response, among other things. Estimated costs for these events from 2016-2018 ranged between $6-7 million annually, and in 2019, more than $13 million—paid for primarily with annual federal appropriations. 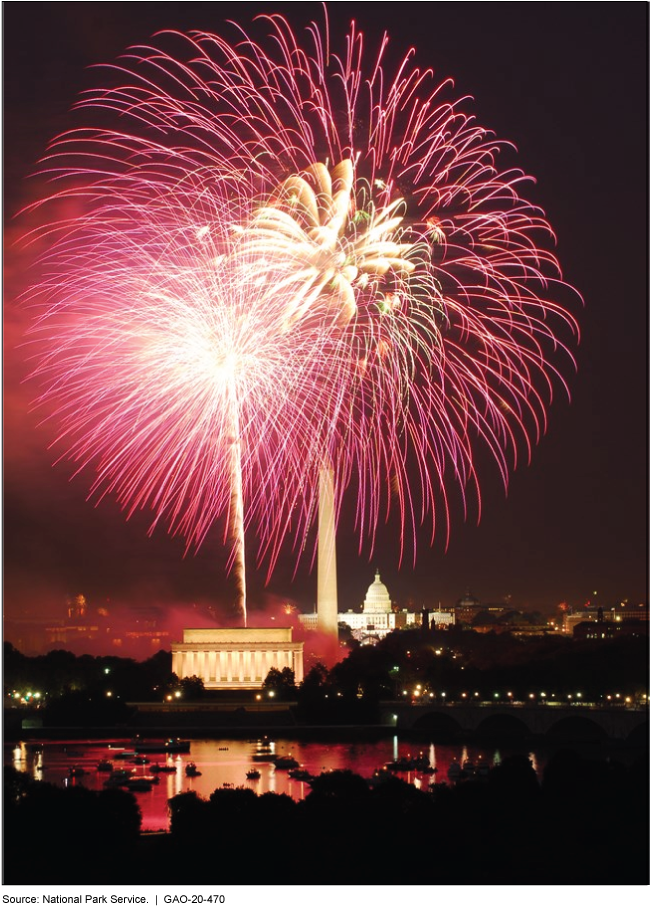 Fireworks over the National Mall

From 2016 through 2019, hundreds of personnel from numerous federal agencies, state and local jurisdictions, and private entities planned, produced, and executed events on the National Mall that celebrated Independence Day of the United States. The National Park Service (NPS) was responsible for the overall execution of Fourth of July events on the National Mall. In addition, various federal agencies—including the Department of Homeland Security, United States Capitol Police, United States Coast Guard, and Department of Justice—helped to ensure safety. Beyond the federal effort, the District of Columbia Government (DC Government) and local law enforcement played a role in the overall events. Further, given the crowds and potential for high temperatures in July in Washington, D.C., it was important that organizers—including the Department of Health and Human Services—ensured adequate medical resources were available to attendees and participants.

The estimated costs for the events held in 2016, 2017, and 2018 ranged from $6 million to $7 million annually, and included contract costs with private entities tasked with producing and executing the concert and fireworks. They also included the costs for overtime and holiday pay for federal employees working at the events. In 2019, with the addition of the Salute to America event, the Department of Defense (DOD) and Executive Office of the President undertook additional efforts. Estimated costs for the 2019 events on the National Mall increased to more than $13 million. This increase was attributable to the cost for DOD to transport several vehicles to the National Mall, the production and execution of the Salute to America event, and the additional security involved because the President attended the event.

In addition, there were costs not directly attributable to the events, including salaries of some federal employees who performed duties during the events, as well as costs for fuel and depreciation on DOD assets. These costs were classified as not directly attributable to the Fourth of July events because they would have been incurred regardless of whether the events occurred. For example, according to DOD, the flight time related to the military flyovers for the Salute to America event were required training hours that pilots must complete annually, and therefore the related expenses, such as pilot salaries and fuel costs, were not included in event cost estimates.

The Second Continental Congress formally adopted the Declaration of Independence on July 4, 1776. Since that day, Americans have celebrated this holiday through events held in towns and cities across the country. In the nation's capital, Washington, D.C., visitors have celebrated on the National Mall by attending federally sponsored events such as the National Independence Day Parade; A Capitol Fourth Concert; Independence Day Fireworks Display; and in 2019, A Salute to America.

To perform this work, GAO reviewed documentation and interviewed personnel from federal agencies and state and local jurisdictions about their estimated costs and resources used for the events.