To fight money laundering and other crimes, the Bank Secrecy Act requires banks to verify customers’ identities and report suspicious activities. We looked at federal oversight of banks’ compliance with these requirements—particularly when banks’ customers are money transmitting businesses.

Some federal bank examiners were unclear about how much due diligence they should expect from banks’ site visits and reviews of their money transmitter customers. 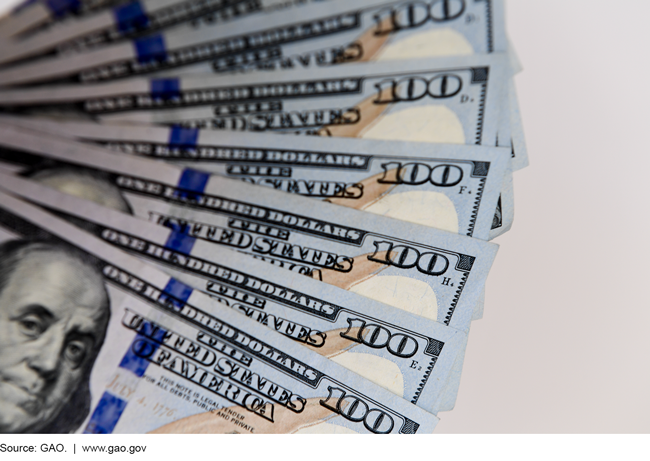 From 2014 through 2016, 40 of 86 banks with money transmitter customers that responded to GAO's survey indicated they terminated at least one money transmitter account for money-laundering-related reasons. Money transmitters transfer money for their customers to recipients domestically or internationally. Common reasons given for terminating accounts included the customer not providing information needed to satisfy the banks' due diligence requirements under Bank Secrecy Act (BSA)/anti-money laundering (AML) regulations and that the cost of BSA/AML compliance made these customers unprofitable. However, banks also cited concerns that these customers drew heightened regulatory oversight; this may indicate “derisking,” the practice of banks limiting services or closing accounts with customers to avoid any perceived regulatory concerns about facilitating money laundering.

Federal bank examiners in some of GAO's discussion groups identified challenges in assessing banks' compliance with due diligence requirements. In 2005, the Department of the Treasury's (Treasury) Financial Crimes Enforcement Network (FinCEN) and the federal banking regulators issued interagency interpretive guidance to clarify BSA/AML requirements and supervisory expectations for banks providing banking services to money transmitters. The guidance was incorporated in the Federal Financial Institutions Examination Council BSA/AML examination manual. However, examiners from some discussion groups said it was unclear how much due diligence is reasonable to expect banks to conduct for their money transmitter customers. For example, while the manual's examination guidance pertaining to money transmitters states that due diligence on higher-risk accounts can include reviewing the money transmitter's BSA/AML compliance program or conducting on-site visits, the related examination procedures do not clarify what these reviews or visits might entail. Unless federal banking regulators take steps to improve examiners' ability to evaluate banks' compliance with BSA/AML requirements as applied to money transmitter accounts, examiners may not be fully achieving examination objectives.

In response to derisking concerns associated with money transmitters, FinCEN and the federal banking regulators have issued general guidance that discourages banks from terminating accounts with any particular customer type without evaluating individual customers' risks. In prior work, GAO noted that regulators had not fully evaluated how banks' regulatory concerns may be influencing decisions to derisk. GAO recommended that FinCEN and the federal banking regulators conduct a retrospective review of BSA regulations and their implementation, with a focus on how banks' regulatory concerns may affect their decisions to provide services. According to federal banking regulators and FinCEN, they and Treasury established an interagency working group in early 2018 that they believe will address the recommendation. The working group has taken important steps toward improving the efficiency and effectiveness of BSA/AML supervision, including issuing an interagency statement intended to improve the transparency of the risk-focused approach examiners use to plan and conduct BSA examinations. However, the working group has not yet evaluated the full range of factors that may influence banks to derisk.

This report examines, among other issues, (1) the extent to which banks are terminating or limiting services for money transmitters, (2) challenges in assessing banks' BSA/AML compliance related to money transmitters, and (3) regulators' actions to address derisking concerns.

GAO also reiterates its recommendation in GAO-18-263 that FinCEN and the federal banking regulators conduct a retrospective review of BSA regulations and implementation.