We examined school shootings and found:

Half were committed by current or former students

Suburban and rural, wealthier, and low-minority schools had more school-targeted shootings; such shootings were the most fatal and most commonly committed by students

Urban, poor, and high-minority schools had more shootings overall and more motivated by disputes; these shootings were often committed by non-students or unknown shooters

More shootings happened outside, but those inside schools were usually more deadly

We found no empirical research from 2009-2019 that directly examined the link between school discipline and school shootings. 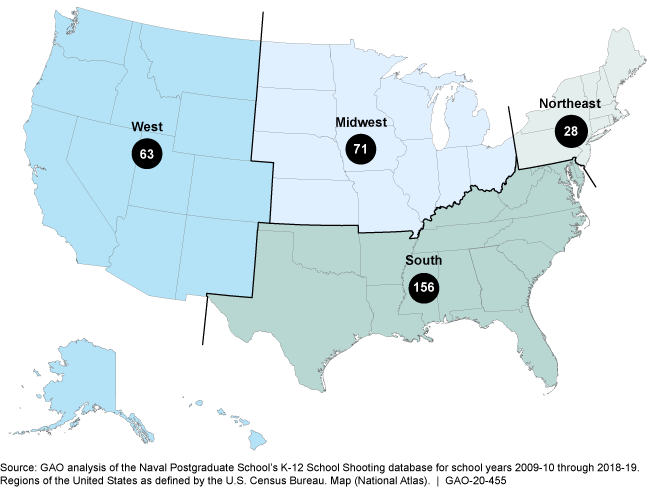 GAO found that shootings at K-12 schools most commonly resulted from disputes or grievances, for example, between students or staff, or between gangs, although the specific characteristics of school shootings over the past 10 years varied widely, according to GAO's analysis of the Naval Postgraduate School's K-12 School Shooting Database. (See figure.) After disputes and grievances, accidental shootings were most common, followed closely by school-targeted shootings, such as those in Parkland, Florida and Santa Fe, Texas. 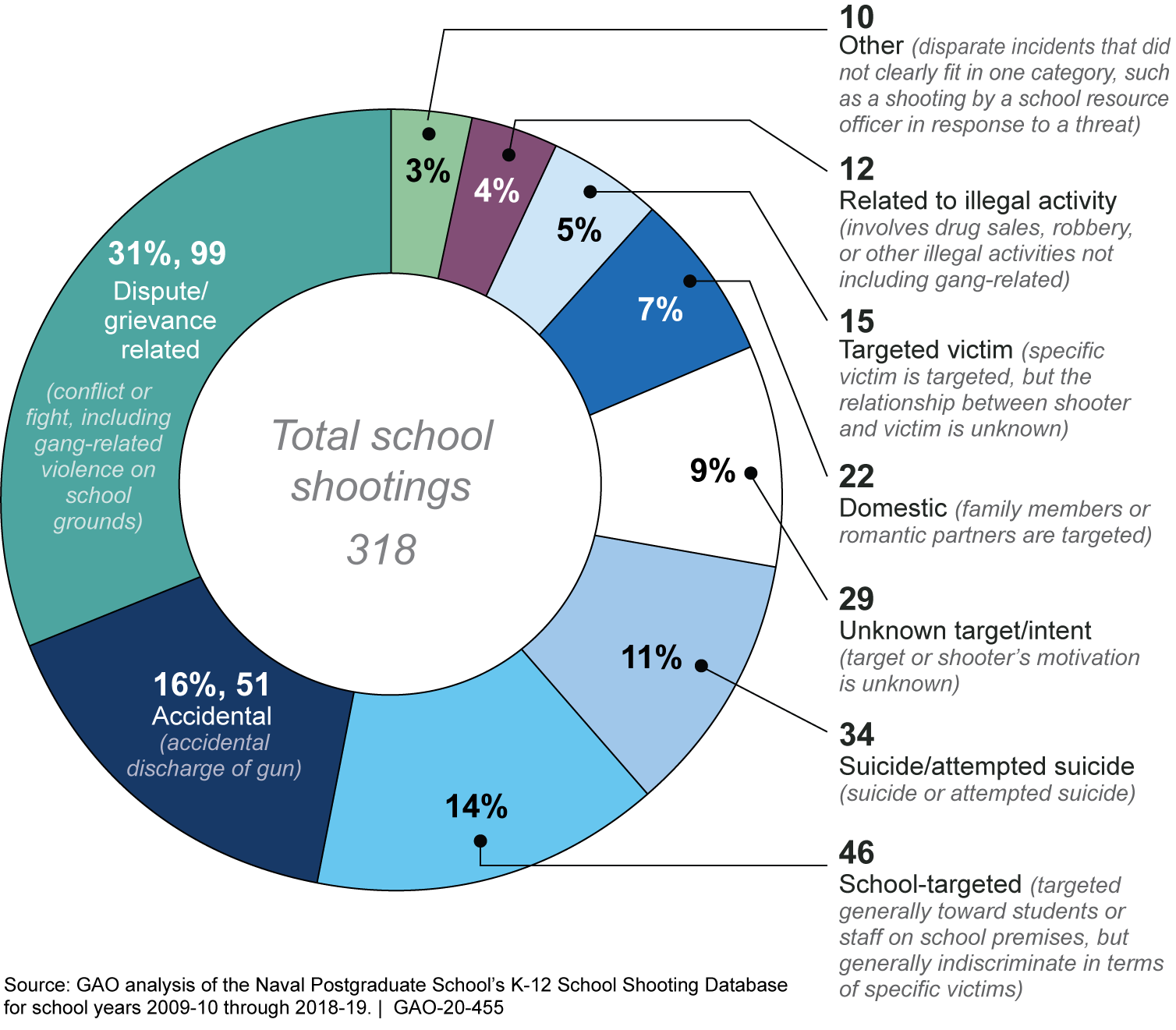 The characteristics of schools where shootings occurred over the past 10 years also varied by poverty level and racial composition. Urban, poorer, and high minority schools had more shootings overall, with more characterized as a dispute or grievance. Suburban and rural, wealthier, and low minority schools had more suicides and school-targeted shootings, which had the highest fatalities per incident. Overall, more than half of the 166 fatalities were the result of school-targeted shootings.

GAO found no empirical research in the last 10 years (2009-2019) that directly examined the link between school discipline and school shootings. According to literature GAO examined and five study authors GAO interviewed, various factors contribute to the lack of research examining this particular link, including that multiple and complex factors affect an individual's propensity toward violence, making it difficult to isolate the effect of any one factor, including school discipline. 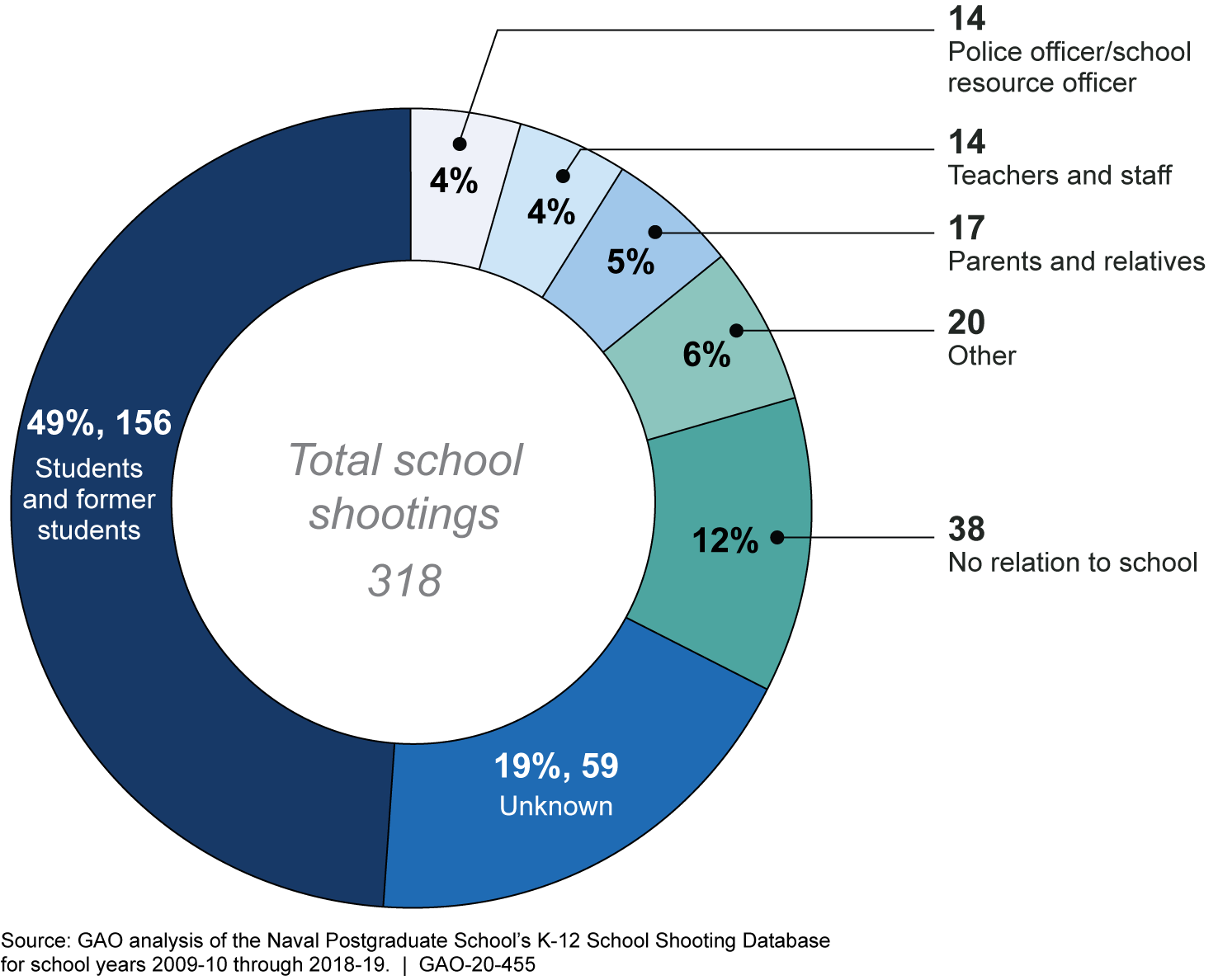 Notes: Percentages do not add to 100 percent, due to rounding. “Unknown,” as recorded in the K-12 School Shooting Database, includes incidents in which the shooter was identified but the shooter’s relationship to the school could not be determined. “Other” combines four categories from the K-12 School Shooting Database: intimate relationship with victim, multiple shooters, students from a rival school, and non-students using athletic facilities/attending game. 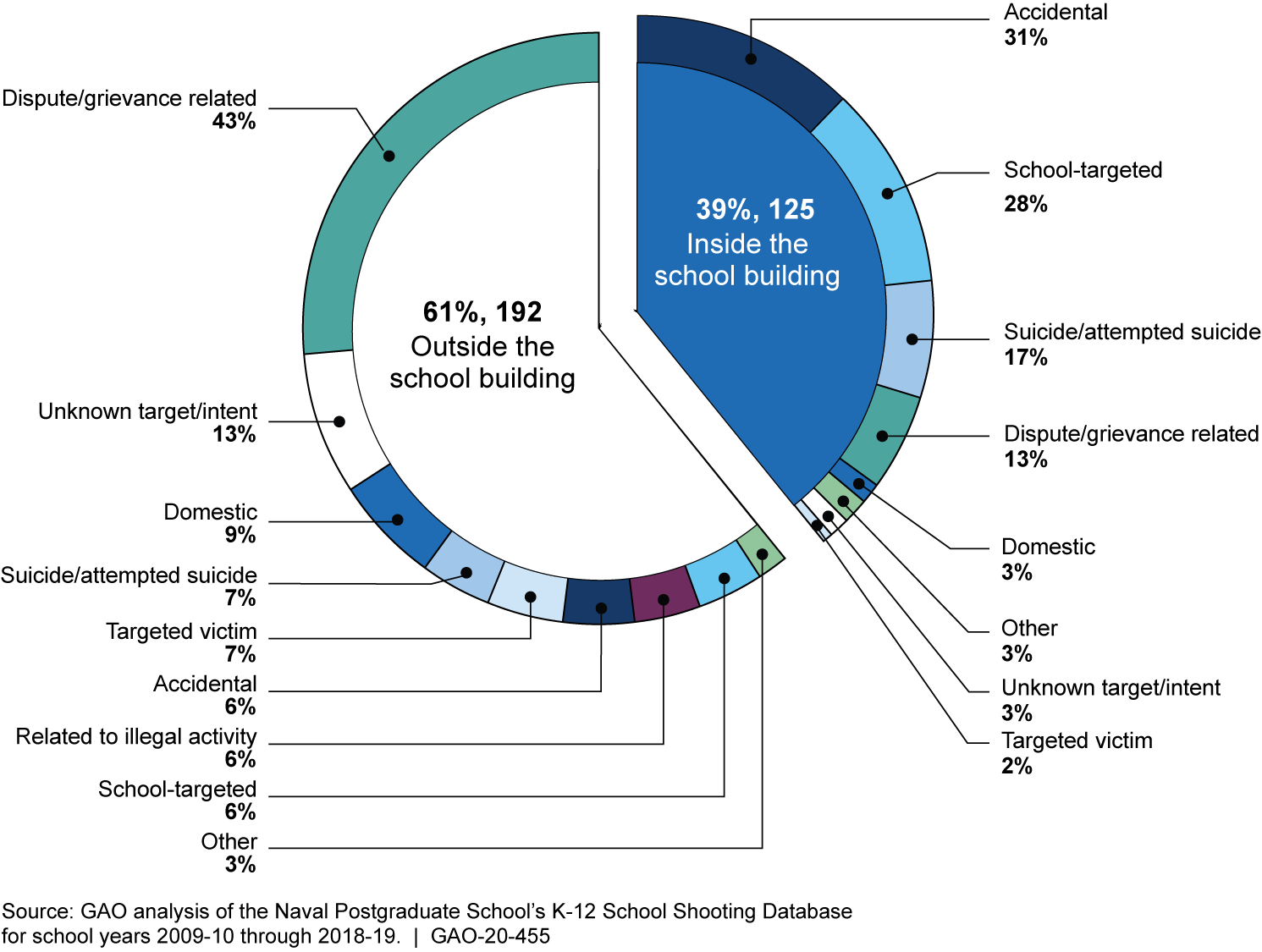 In addition to the potential loss of life, school shootings can evoke feelings of profound fear and anxiety that disturb a community's sense of safety and security. Questions have been raised about whether schools' approaches to addressing student behavior are a factor in school shootings. These approaches include discipline that removes the offending students from the classroom or school, and preventative approaches meant to change student behaviors before problems arise.