We audited compliance with the Lobbying Disclosure Act, which requires paid lobbyists to disclose their activities, political contributions, and certain criminal convictions.

Lobbyists complied with reporting requirements under the Justice Against Corruption on K Street Act of 2018 (JACK Act).

20% of reports failed to disclose lobbyists’ previously-held positions in Congress and the executive branch. 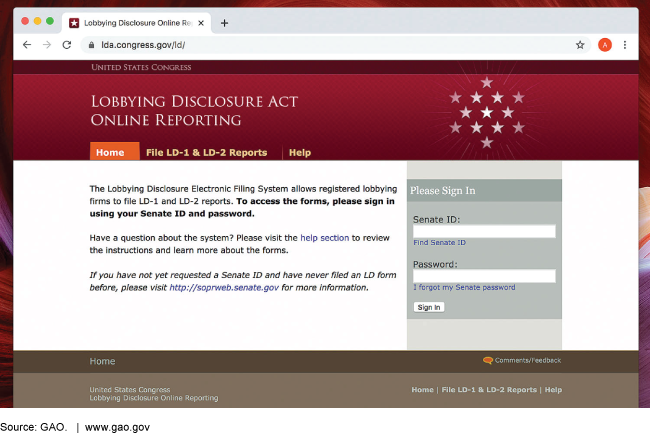 For the 2019 reporting period, most lobbyists provided documentation for key elements of their disclosure reports to demonstrate compliance with the Lobbying Disclosure Act of 1995, as amended (LDA). For lobbying disclosure (LD-2) reports and political contribution (LD-203) reports filed during the third and fourth quarters of 2018 and the first and second quarters of 2019, GAO estimates that

90 percent of lobbyists who filed new registrations also filed LD-2 reports as required for the quarter in which they first registered (the figure below describes the filing process and enforcement);

95 percent of all lobbyists who filed could provide documentation for lobbying income and expenses; and

20 percent of all LD-2 reports may not have properly disclosed one or more previously held covered positions as required..

Except as noted above, these findings are generally consistent with GAO's findings since 2010. Under a new law, lobbyists are required to report certain criminal convictions. GAO found that, of the 161 lobbyists it successfully identified, no lobbyist had failed to report a conviction.

GAO continues to find that most lobbyists in the sample reported some level of ease in complying with disclosure requirements and in understanding the definitions of terms used in the reporting. However, some disclosure reports demonstrate compliance difficulties, such as failure to disclose covered positions or misreporting of income or expenses.

The U.S. Attorney's Office for the District of Columbia (USAO) continued its efforts to resolve noncompliance through filing reports or terminating registrations, as well as imposing civil and criminal penalties. USAO received 4,220 referrals from both the Secretary of the Senate and the Clerk of the House for failure to comply with reporting requirements cumulatively for years 2009 through 2019. Of the 4,220 referrals, about 41 percent are now compliant and about 59 percent are pending further action.

The LDA, as amended, requires lobbyists to file quarterly disclosure reports and semiannual reports on certain political contributions. The law also includes a provision for GAO to annually audit lobbyists' compliance with the LDA. This report, among other things, (1) determines the extent to which lobbyists can demonstrate compliance with disclosure requirements; (2) identifies challenges or potential improvements to compliance that lobbyists report; and (3) describes the efforts of USAO in enforcing LDA compliance. This is GAO's 13th annual report under the provision.

GAO reviewed a stratified random sample of 98 quarterly disclosure LD-2 reports filed for the third and fourth quarters of calendar year 2018 and the first and second quarters of calendar year 2019. GAO also reviewed two random samples totaling 160 LD-203 reports from year-end 2018 and midyear 2019. This methodology allowed GAO to generalize to the population of 49,902 disclosure reports with $5,000 or more in lobbying activity and 30,853 reports of federal political campaign contributions. GAO also interviewed USAO officials.

GAO is not making any recommendations in this report. GAO provided a draft of this report to the Department of Justice for review and comment. The agency stated that it did not have comments.

This report was revised on June 9, 2020, with changes to the highlights page and page 18 to insert correct numbers of lobbyists that did not report political contributions.