Each year, GAO identifies and reports on federal agency programs with fragmented, overlapping, or duplicative goals or activities and ways to reduce costs or enhance revenue.

Our 10th annual report identifies 168 new actions that Congress and agencies could take to improve operations. For example, the U.S. Navy could save billions of dollars by improving how it acquires and sustains its ships.

Agencies have made significant progress fully or partially addressing many of the over 900 actions we identified in the past decade—leading to about $429 billion in financial benefits. Addressing remaining actions could save tens of billions more dollars. 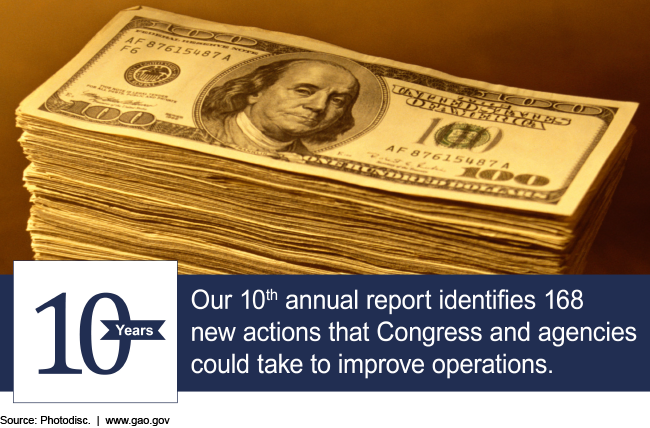 GAO’s 2020 annual report identifies 168 new actions for Congress or executive branch agencies to improve the efficiency and effectiveness of government in 29 new mission areas and 10 existing areas. For example:

Significant progress has been made in addressing many of the 908 actions that GAO identified from 2011 to 2019 to reduce costs, increase revenues, and improve agencies’ operating effectiveness. As of March 2020, Congress and executive branch agencies have fully or partially addressed 79 percent of all actions (721 of 908 actions)—57 percent (519 actions) fully addressed and 22 percent (202 actions) partially addressed. This has resulted in approximately $429 billion in financial benefits. About $393 billion of these benefits accrued between 2010 and 2019, and $36 billion are projected to accrue in future years. This is an increase of $166 billion from GAO’s 2019 annual report. These are rough estimates based on a variety of sources that considered different time periods and utilized different data sources, assumptions, and methodologies.

Total Reported Financial Benefits of $429 Billion, as of March 2020

Note: The aggregated potential financial benefits reported here should not be considered an exact total.

While Congress and executive branch agencies have made progress toward addressing actions that GAO has identified since 2011, further steps are needed. GAO estimates that tens of billions of additional dollars could be saved should Congress and executive branch agencies fully address the remaining 467 open actions, including the new ones identified in 2020. Addressing the remaining actions could lead to other benefits as well, such as increased public safety, and more effective delivery of services. For example:

The federal government has made an unprecedented financial response to the COVID-19 pandemic. At the same time, opportunities exist for achieving billions of dollars in financial savings and improving the efficiency and effectiveness of a wide range of federal programs in other areas.

Congress included a provision in statute for GAO to identify and report on federal programs, agencies, offices, and initiatives—either within departments or government-wide—that have duplicative goals or activities. GAO also identifies areas that are fragmented or overlapping and additional opportunities to achieve cost savings or enhance revenue collection.

This report discusses the new areas identified in GAO’s 2020 annual report—the 10th report in this series; the progress made in addressing actions GAO identified in its 2011 to 2019 reports; and examples of open actions directed to Congress or executive branch agencies.

To identify what actions exist to address these issues, GAO reviewed and updated prior work, including matters for congressional consideration and recommendations for executive action.

Our plan to save the government tens of billions of dollars through reducing fragmentation, overlap and duplication.

The federal government has made an unprecedented financial response to the COVID-19 (coronavirus)...
Blog Post