We held 14 focus groups with women retirees across the United States to get their perspectives on financial security. Every group was concerned about rising health care costs and each group discussed how a lack of personal finance education had a negative effect on their retirement security. Women in all groups also equated financial security in retirement with being able to maintain their independence.

We also analyzed data on the retirement security of older women and found:

Liquidity and traditional pensions were important at all levels of wealth

A large portion of women over 70 are widows 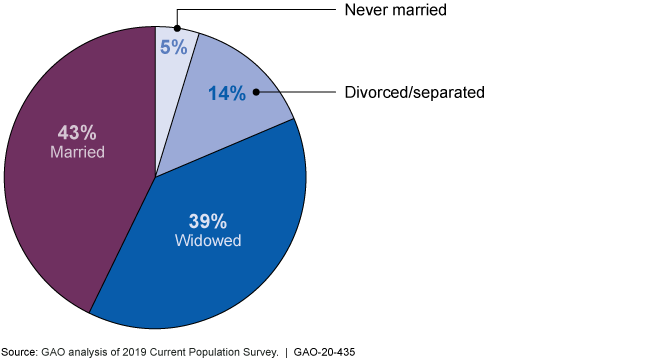 In all 14 focus groups GAO held with older women, women described some level of anxiety about financial security in retirement. Many expressed concerns about the future of Social Security and Medicare benefits, and the costs of health care and housing. Women in the groups also cited a range of experiences that hindered their retirement security, such as divorce or leaving the workforce before they planned to (see fig.). Women in all 14 focus groups said their lack of personal finance education negatively affected their ability to plan for retirement. Many shared ideas about personal finance education including the view that it should be incorporated into school curriculum starting in kindergarten and continuing through college, and should be available through all phases of life.

Women Age 70 and Over by Marital Status 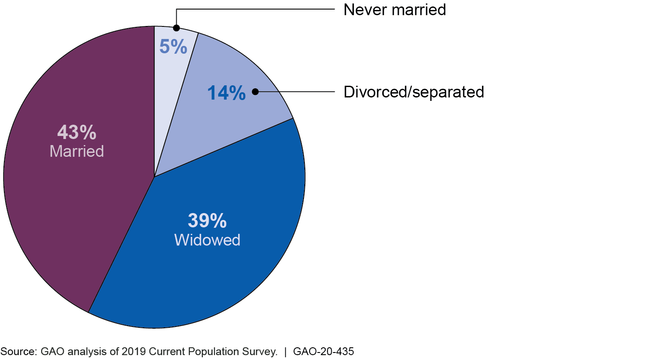 Note: Percentages do not add up to 100 percent due to rounding.

Older adults represent a growing portion of the U.S. population and older women have a longer life expectancy, on average, than older men. Prior GAO work has found that challenges women face during their working years can affect their lifetime earnings and retirement income. For example, we found women were overrepresented in low wage professions, paid less money than their male counterparts during their careers, and were more likely to leave the workforce to care for family members. Taken together, these trends may have significant effects on women's financial security in retirement.

GAO held 14 non-generalizable focus groups with older women in both urban and rural areas in each of the four census regions. GAO also analyzed data from three nationally representative surveys—the 2019 Current Population Survey, the Health and Retirement Study (2002-2014 longitudinal data), and the 2016 Survey of Consumer Finances.

In a word: yes. On Thursday, the Comptroller General of the United States Gene Dodaro, head of GAO...
Blog Post