DOD’s Missile Defense Agency uses flight tests to assess if the weapons it acquires for the ballistic missile defense system work as intended.

Since the Missile Defense Agency has not assessed its test planning and execution process despite these problems, we recommended it get an independent assessment. 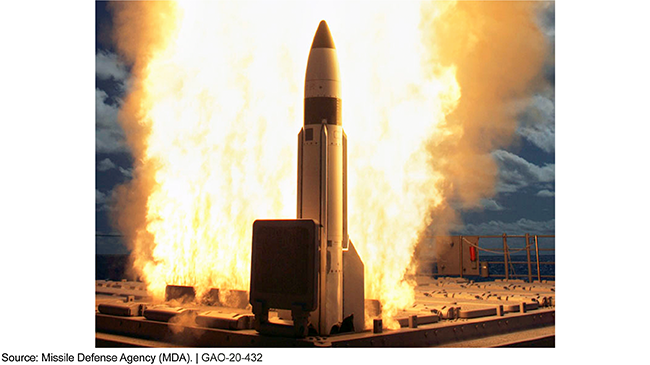 In fiscal year 2019, the Missile Defense Agency (MDA) delivered many of the Ballistic Missile Defense System (BMDS) assets it planned and conducted key flight tests, but did not meet all of its goals for the year. For example, MDA successfully delivered interceptors for use by warfighters and conducted a salvo test (which involves launching two interceptors at an incoming target) for the Ground-based Midcourse Defense program. However, MDA did not meet all of its goals for delivering assets or testing. For example, MDA completed only two of seven planned flight tests, plus eight additional flight tests that were later added for fiscal year 2019.

MDA did not fully execute its fiscal year 2019 flight testing, continuing a decade-long trend in which MDA has been unable to achieve its fiscal year flight testing as scheduled. Although MDA revised its approach to developing its annual test plan in 2009 to ensure the test plan was executable, over the past decade MDA has only been able to conduct 37 percent of its baseline fiscal year testing as originally planned due to various reasons including developmental delays, range and target availability, or changing test objectives. In addition, MDA has not conducted an assessment to determine whether its current process for developing and executing its annual test plan could be improved to help ensure its executability. Without an independent assessment, MDA will continue down the same path, increasing the risk of the same outcomes from the past decade—less testing than originally planned, resulting in less data to demonstrate and validate capabilities.

Note: This graphic is a compilation of each individual fiscal year's flight test schedule. As such, if a flight test was planned for a particular fiscal year but then delayed to a later fiscal year, it would be counted both times.

MDA is currently at a pivotal crossroads, needing to balance its ability to pursue new and advanced efforts while also maintaining its existing portfolio of BMDS elements that have not transferred to the military services as originally planned. The new and advanced efforts, such as the Next Generation Interceptor—a new interceptor for homeland defense—are research and development-intensive tasks, which carry significant technical risks and financial commitments. As MDA takes on these new efforts, it is increasingly important that the agency establish and maintain a sound and disciplined acquisition approach for these efforts to be successful and within anticipated costs and timeframes.

For over half a century, the Department of Defense (DOD) has funded efforts to defend the United States from ballistic missile attacks. From 2002 through 2018, MDA has received about $152 billion to develop the BMDS and requested about $47 billion from fiscal year 2019 through fiscal year 2023. The BMDS consists of diverse and highly complex land-, sea-, and space-based systems and assets located across the globe.

Congress included a provision in statute that GAO annually assess and report on MDA's progress. This, our 17th annual review, addresses for fiscal year 2019 (1) the progress MDA made in achieving delivery and testing goals; (2) the extent to which MDA's annual test plan is executable; and (3) broad challenges that could impact MDA's portfolio. GAO reviewed the planned fiscal year 2019 baselines, along with test plans since 2010, and other program documentation and assessed them against program and baseline reviews. GAO also interviewed officials from MDA and DOD agencies, including the office of the Director, Operational Test and Evaluation, Undersecretary of Defense for Research and Engineering, and the BMDS Operational Test Agency.

GAO recommends that MDA ensure an independent assessment is conducted of its process for developing and executing its annual BMDS flight test plan. DOD concurred with the recommendation.