On average, 17 pedestrians died each day in 2018 as a result of vehicle crashes—up 43% from 2008. Automakers offer safety features on many new cars to help protect pedestrians. For example, crash avoidance technologies use cameras or radar to detect pedestrians and warn drivers or automatically slow or stop the car.

The National Highway Traffic Safety Administration has researched pedestrian safety and developed procedures to test new cars. In 2015, NHTSA proposed including these tests in its new car assessment program, but hasn’t made a decision on how to move forward or set a timeline for that to happen. We recommended they decide. 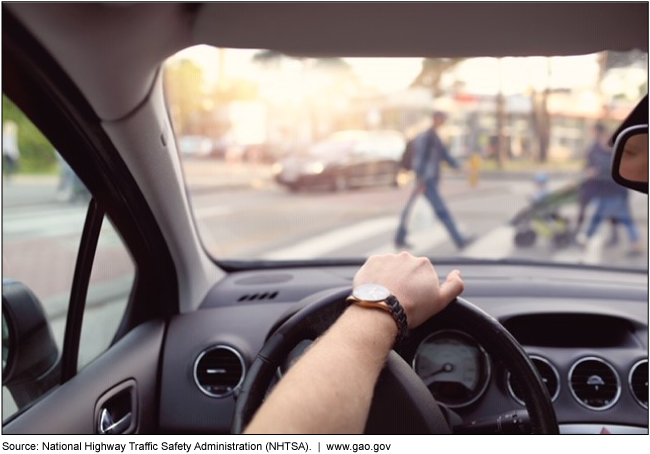 National Highway Traffic Safety Administration (NHTSA) data show that certain vehicle characteristics related to age, body type, and the speed of the vehicle at the time of the crash are associated with increases in pedestrian fatalities from 2008 to 2018. Specifically, the number of pedestrian fatalities during this time period increased more for crashes involving vehicles that were:

sport utility vehicles compared to other passenger vehicles, and

traveling over 30 miles per hour compared to vehicles traveling at lower speeds.

GAO also found that NHTSA does not consistently collect detailed data on the type and severity of pedestrian injuries, but began a pilot program in 2018 to improve its data collection efforts. NHTSA, however, lacks an evaluation plan with criteria to assess whether to expand the pilot program, as called for in leading practices. As a result, NHTSA lacks information to determine how and whether it should expand the pilot to meet the agency's data needs.

In 2015 NHTSA proposed pedestrian safety tests for its New Car Assessment Program (NCAP), but NHTSA has not decided whether it will include such tests in the program. NHTSA has reported that crash avoidance technologies could lead to a decrease in pedestrian fatalities. Nine automakers that GAO interviewed reported that NHTSA's lack of communication about pedestrian safety tests creates challenges for new product development. NHTSA has also not documented a clear process for updating NCAP with milestones for decisions. NHTSA officials said that updating NCAP involves many actions and can take years. However, absent a final decision on whether to include pedestrian safety tests in NCAP and a documented process for making such decisions, the public lacks clarity on NHTSA's efforts to address safety risks.

In 2018, about 6,300 pedestrians—17 per day—died in collisions with motor vehicles in the United States, up from about 4,400 in 2008. Many factors influence pedestrian fatalities, including driver and pedestrian behavior. Vehicle characteristics are also a factor. NHTSA tests and rates new vehicles for safety and reports the results to the public through its NCAP. Currently, pedestrian safety tests are not included in NCAP.

This report examines: (1) what is known about the relationship between vehicle characteristics and pedestrian fatalities and injuries, (2) approaches automakers have taken to address pedestrian safety, and (3) actions NHTSA has taken to assess whether pedestrian safety tests should be included in NCAP. GAO analyzed data on pedestrian fatalities and injuries from 2008 through 2018 (the most recent available data); reviewed NHTSA reports; and interviewed NHTSA officials. GAO also obtained information about pedestrian safety features from 13 automakers that represented about 70 percent of new vehicle sales in the United States in 2018, and compared NHTSA's actions with leading program management practices.

GAO is recommending that NHTSA (1) develop an evaluation plan with criteria for expanding its pilot program, (2) make and communicate a decision about whether to include pedestrian safety tests in NCAP, and (3) document the process for making changes to NCAP. The Department of Transportation concurred with our recommendations.