DOD wants to consolidate the four organizations that operate commissaries and exchanges into a single organization, to eliminate redundancies and save money. However, DOD may have overestimated the savings and underestimated the costs of consolidation in its business case analysis. DOD also did not provide Congress with comments and concerns from the military services on consolidation.

We recommended that DOD reassess and update its savings and cost estimates and provide additional information to Congress.

Commissary and Exchange Stores at Marine Corps Base Quantico, Virginia 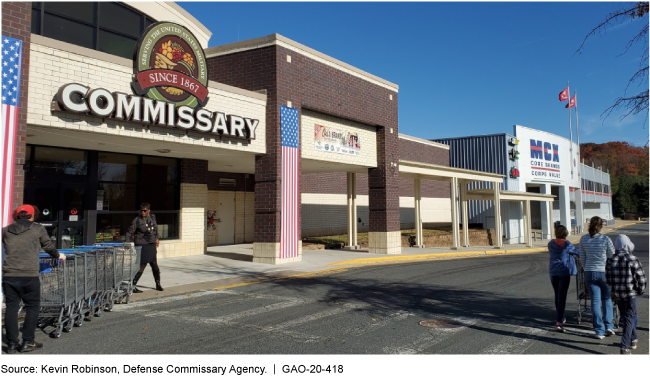 A Department of Defense (DOD) task force's business case analysis for consolidating the defense resale organizations—the Defense Commissary Agency (DeCA), the Army and Air Force Exchange Service, the Navy Exchange Service Command, and Marine Corps Community Services—may not provide reliable savings and cost estimates. These organizations sell groceries and retail goods to servicemembers, their families, and retirees. The task force recommended consolidating the four resale organizations into a single organization, estimating “net savings” (i.e., savings minus costs) of about $690 million to $1.3 billion during the first 5 years. However, the task force may have overestimated savings and underestimated costs.

Information technology (IT) costs. The task force estimated the costs of developing new, common IT systems to operate a consolidated resale organization to be between $326 million and $401 million, about 50 percent of estimated consolidation costs. The task force stated that it based IT cost estimates on data resale organizations provided for major upgrades or system replacements. But GAO found that about 40 percent of the IT cost estimate was based on minor upgrades or partial replacements, not major upgrades or system replacements. Thus, the estimate may be understated.

Headquarters relocation costs. According to the task force, there will be costs if DOD decides to relocate the four defense resale organizations to a new headquarters location. However, the task force did not include cost estimates for relocation in its business case analysis.

According to federal law, the operation of the commissary and exchange systems may not be consolidated unless authorized by Congress. Until the task force reassesses and updates, as necessary, its savings and costs estimates, DOD and Congress will not have reliable information to consider resale consolidation.

The military departments officially concurred with the business case analysis, but provided written comments detailing fundamental concerns with the analysis, such as the use of proprietary industry benchmarks and the estimated savings and costs. In April 2019, DOD reported to Congress that the military departments agreed with consolidation, but did not disclose the accompanying comments. Without more complete reporting of those comments, Congress has limited visibility of the views of the organizations involved in a potential consolidation.

DOD operates about 240 commissaries and 2,500 exchanges that sell groceries and retail goods and services to servicemembers, their families, and retirees. Commissaries and exchanges are operated by four resale organizations, and in November 2018 a DOD task force completed a business case analysis on consolidating those organizations.

GAO is making four recommendations, including that DOD reassess and update as necessary its estimates for consolidation savings and costs, and provide additional information to Congress on the military departments' comments on the November 2018 business case analysis. DOD concurred with three recommendations and provided updated estimates. DOD did not concur with the last recommendation. GAO continues to believe providing such information is beneficial, as discussed in the report.