Eight of the programs reported having no goals that define program achievements. We made 3 recommendations, including that agencies develop goals to better monitor program performance. 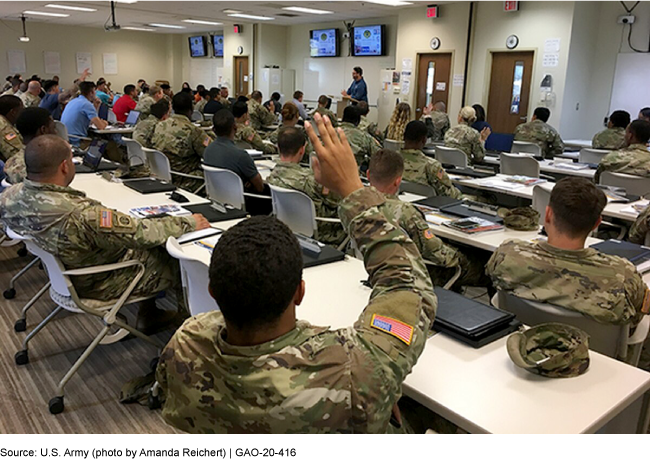 Servicemembers in a classroom

The 45 federal programs that provided career assistance to military families were administered by 11 agencies and frequently provided similar services to similar populations, based on GAO's analysis of survey data; however, the programs reported coordinating in various ways to manage overlap and fragmentation. All 11 agencies administered programs for veterans and seven agencies also administered programs for servicemembers (see table below). These programs offered similar services, such as 25 programs that offered educational counseling and 22 programs that offered employment counseling. Coordination efforts included co-located services, participant referrals, and interagency agreements to share information.

Agencies varied in the extent to which they assessed the effectiveness of their programs. Eight of 45 programs reported having no goals that define program achievements. Also, while the majority of programs reported having either tracked outcomes or conducted recent evaluations, nine of 45 programs reported taking neither step. According to agency officials, these programs had not assessed outcomes for various reasons, such as that the program was relatively small, not statutorily required to set performance goals, or lacked a data collection system to track outcomes. However, by establishing a system to define goals and assess outcomes—leading practices for monitoring program performance—agencies are better able to demonstrate whether programs are achieving their intended results and ensure resources are being appropriately targeted to provide career assistance to military families.

Roughly 250,000 servicemembers transition from military to civilian life every year, and 45 programs across the federal government facilitate their civilian employment, according to a previous GAO survey. These programs provide military families—servicemembers, veterans, spouses, and dependents—with a range of career assistance in the form of education, employment, and self-employment services. The conference report accompanying the National Defense Authorization Act for Fiscal Year 2018 included a provision for GAO to assess some of these benefits and programs.

This report examines (1) the extent to which programs provided similar services to similar populations and how agencies coordinate to manage any overlap and fragmentation, and (2) agency efforts to assess program effectiveness.

GAO analyzed responses to its 2018 survey of federal agency officials. The survey was administered during previous work to develop a program inventory. GAO also categorized programs by the populations served and services provided.