In our 12th annual Quick Look at the status of NASA's major projects, we found costs grew for the third year in a row. NASA’s acquisition management is on our High Risk List.

We expect cost increases and schedule delays for major programs to get worse. For example, delays are likely for the Artemis I mission, NASA’s next step in returning astronauts to the moon in 2024. NASA is also planning other lunar-related efforts that will become major projects. These efforts are complex and could face significant cost increases and schedule delays. 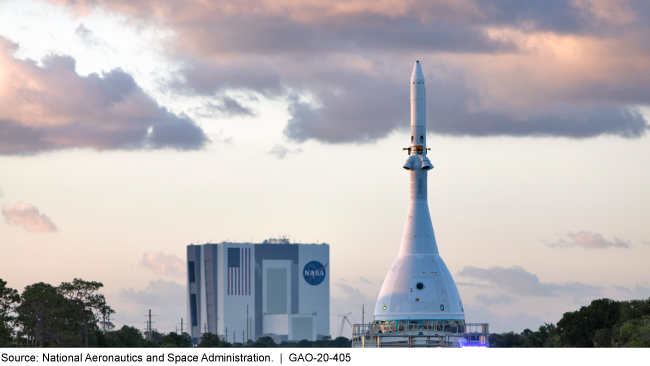 The National Aeronautics and Space Administration's (NASA) portfolio of major projects continued to experience significant cost and schedule growth this year and the performance is expected to worsen. Since GAO last reported on the portfolio in May 2019, cost growth was approximately 31 percent over project baselines—the third consecutive year that cost growth has worsened after a period of decline. The average launch delay was 12 months, compared to 13 months last year. See figure.

Additional cost growth and schedule delays are likely after NASA establishes a new launch date for Artemis I—an uncrewed test flight of the Space Launch System, Orion crew capsule, and associated ground systems. Further, in 2019, GAO found that the Space Launch System (SLS) and Orion programs have underreported cost growth. GAO recommended that SLS calculate cost growth based on costs that are currently included in the first mission and that the Orion program update its cost estimate to reflect the schedule agreed to in its baseline. Both recommendations still require action to address. Looking ahead, NASA will continue to face significant cost and schedule risks as it undertakes complex efforts to return to the moon under an aggressive time frame.

NASA has taken actions to identify and address challenges contributing to its chronic difficulty meeting cost and schedule goals. For example, in response to a GAO recommendation, NASA plans to broaden its use of a project management process known as earned value management. In addition, NASA plans to assess and update its cost and schedule estimates at more points in the acquisition process and bolster its training for analysts who oversee projects. Such actions will help to provide a better foundation for decision-making, but it will take time to assess the extent to which these efforts are having an effect. Further, GAO's work has found that success also hinges on leadership commitment, accountability, and demonstrated progress.

This report provides GAO's annual snapshot of how well NASA is planning and executing its major acquisition projects. In May 2019, GAO found that the cost of NASA's major projects had grown by almost 28 percent since they were baselined with an average launch delay of 13 months.

Congressional conferees included a provision for GAO to prepare status reports on selected large-scale NASA programs, projects, and activities. This is GAO's 12th annual assessment. This report assesses (1) the cost and schedule performance of NASA's portfolio of major projects and (2) progress NASA has made identifying and addressing challenges that contribute to acquisition risk, among other objectives. This report also includes assessments of 24 major projects, each with a life-cycle cost of over $250 million using 2020 data. To conduct its review, GAO analyzed cost, schedule, technology maturity, and other data; reviewed project status reports; and interviewed NASA officials.

GAO has made a number of recommendations over the last 5 years to improve NASA's acquisition of major projects. NASA has implemented changes in response to many of these recommendations, although 17 recommendations have not yet been fully addressed. NASA generally agreed with the findings in this report.