Three Air Force and three Navy aviation depots maintain critical aircraft such as the KC-135 tanker and F/A-18 fighter. Delays at depots can reduce aircraft availability for operations and training.

We reviewed depot performance for selected aircraft over 6 years.

Air Force depots completed maintenance on-time or early in 5 of 6 years (with aircraft in maintenance 22,572 fewer days than expected)

Navy depots were late all 6 years (over 62,000 more days than expected)

We also identified Navy planning challenges, such as a need for more effective use of historical maintenance data. We made 3 recommendations to the Navy to reduce delays. 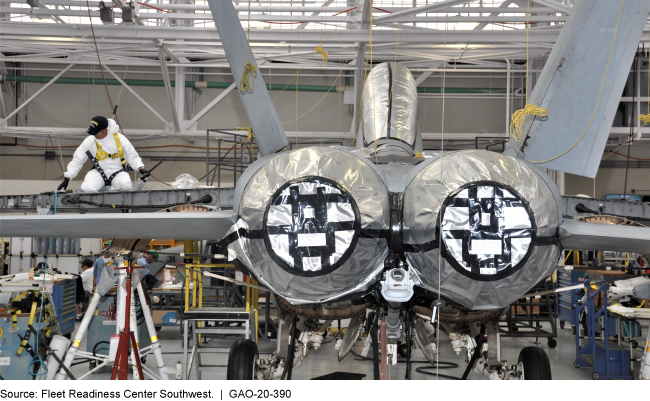 The Air Force and Navy varied in the extent that they completed depot maintenance on time for selected fixed-wing aircraft in fiscal years 2014 through 2019. Specifically, GAO's analysis of aggregate maintenance data found that:

Air Force depots completed aircraft maintenance on time or early in 5 of 6 years, with percentages for on-time or early-completion maintenance ranging from 78 to 90 percent.

Navy depots completed aircraft maintenance late for each of the 6 years, with percentages for on-time or early-completion maintenance ranging from 45 to 63 percent. Navy fixed-wing aircraft have spent over 62,000 more days in maintenance than expected since fiscal year 2014.

Aircraft Maintenance Completed On Time or Early by Service, Fiscal Years 2014 through 2019

The Air Force generally has accurately planned for depot maintenance requirements for selected fixed-wing aircraft during fiscal year 2014 through 2019, but the Navy has not. Both services have initiatives underway to improve planning for aviation depot maintenance; however, GAO identified planning challenges that the Navy has not fully addressed:

Navy depot planners do not have visibility into aircraft maintenance that is performed outside the depots by an operational unit or other maintenance facility—information critical to planning for the condition and depot maintenance needs of individual aircraft.

The Navy does not yet have formal processes and related guidance for communication and coordination between depot stakeholders to inform maintenance requirements planning.

Without addressing these challenges, the Navy cannot appropriately plan for depot maintenance workload and will likely continue to experience maintenance delays that reduce the time aircraft are available for operations and training.

Three Air Force and three Navy aviation depots maintain critical fixed-wing aviation platforms, such as the KC-135 aerial refuelers and F/A-18 fighters. The ability of these depots to complete maintenance on time directly affects military readiness because delays reduce the time aircraft are available for operations and training.

Senate Report 115-262, accompanying a bill for the Fiscal Year 2019 National Defense Authorization Act, contained provisions that GAO examine the Department of Defense's (DOD) aviation depots. GAO's report evaluates the extent to which 1) the Air Force and Navy aviation depots completed selected fixed-wing aircraft maintenance on time from fiscal year 2014 through 2019, and 2) the Air Force and Navy accurately planned for depot maintenance requirements from fiscal year 2014 through 2019 and addressed any associated challenges.