The U.S. Postal Service touches virtually every U.S. household and business and is critical to the national economy. However, it has lost over $78 billion in recent years due to declining mail volumes and rising costs.

Businesses and foreign postal organizations that faced similar challenges made significant changes, such as reducing less profitable products and services. However, USPS can’t make similar changes because it has been unable to reach an agreement with stakeholders, including Congress, on what actions to take.

Congress should consider reassessing what postal services the nation needs, how those services should be funded, and more. 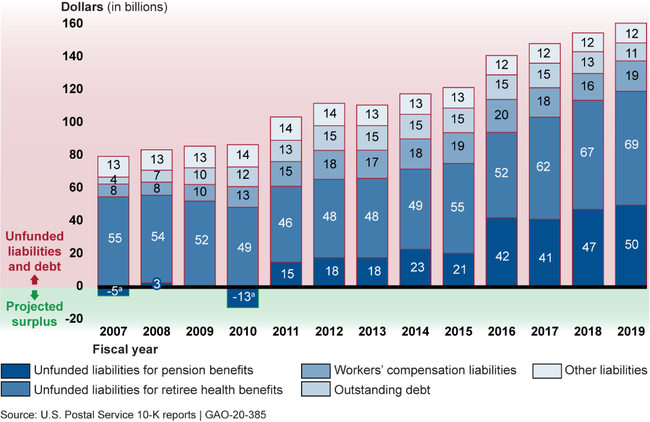 To address these challenges, USPS has taken a variety of actions such as providing increased self-service options and reducing facility hours. Statutory requirements, however, limit USPS's ability to make changes in areas such as certain service offerings, pricing, and its employee compensation and benefits.

In confronting similar types of challenges that are facing USPS, GAO selected large domestic businesses (companies) and foreign postal entities (widely known as “foreign posts”) that have seen significant change in foundational elements of their business models. Specifically, according to GAO's analysis of publicly available reports and interviews of cognizant officials, these organizations have had major changes in services and products, financial self-sustainment, and institutional structure:

Regarding USPS, reassessing its business model should start with the level of required postal services. For example, delivery is USPS’s most costly operation; USPS officials estimate annual savings of $1.4 billion to $1.8 billion if delivery of mail were reduced to 5 days rather than 6 days per week. Second, USPS is to function as a financially self-sustaining entity; however, it does not. A reassessment could include determining whether some of USPS’s costs and liabilities should be borne by taxpayers. Third, alternative institutional structures for USPS range from a federal agency to a private company. A bankruptcy proceeding is not an effective or appropriate means to address the issues associated with a potential USPS restructuring, according to the National Bankruptcy Conference.

Prior GAO reports have included suggestions for Congress to address USPS’s financial viability. For example, GAO’s 2010 report identified strategies to reduce compensation, benefits, and operational costs. GAO stated that Congress, among other things, consider all options available to reduce costs. While bills in this area were introduced and in some cases passed congressional committees, legislation was not enacted. In 2018, GAO reported that the financial outlook for the Postal Service Retiree Health Benefits Fund was poor—the Office of Personnel Management forecasted the fund would be depleted by 2030 if USPS continued not making payments into it. Legislation has not been enacted to place postal retiree health benefits on a more sustainable financial footing. Postal reform legislation has not taken place in part because of the difficulty in obtaining compromise among various stakeholders with divergent views (see figure below). However, since GAO’s 2010 report, USPS’s financial condition has significantly worsened raising fundamental questions about key elements of USPS’s business model. Such questions warrant congressional action.

An independent establishment of the executive branch, USPS is required to provide prompt, reliable, and efficient services to the public. While USPS is to be self-sustaining, it lost about $78 billion from fiscal years 2007 through 2019 due primarily to declining mail volumes and increased costs. Given USPS’s poor financial condition, in 2009 GAO identified USPS’s financial viability as a high-risk area, a designation it retains today.

GAO reviewed its prior reports and related matters for congressional consideration, analyzed laws and regulations, and assessed USPS documents on financial and operational performance. It also reviewed reports by the USPS Office of Inspector General, the Postal Regulatory Commission, and other selected groups such as the 2018 Task Force on the United States Postal Service.

To identify how domestic businesses and foreign posts addressed similar serious challenges, GAO selected for review (1) six domestic organizations in the airline, automobile, and railroad industries and (2) five foreign posts in five countries—Australia, France, Germany, New Zealand, and the United Kingdom. The businesses and countries had characteristics similar to USPS, such as large unionized work forces, and had reportedly made significant changes to their business models. For each of these businesses and countries, GAO analyzed public reports on financial and operational performance, as well as institutional structure and requirements. GAO also interviewed government and postal officials from three selected countries and officials from the National Audit Offices of two of the selected countries. Because questions were raised regarding the application of the U.S. Bankruptcy Code to USPS, GAO also requested the National Bankruptcy Conference to assess whether USPS could use bankruptcy or other restructuring processes.

To examine critical USPS business model elements, GAO reviewed its prior reports and reports from numerous other organizations, and obtained the views of stakeholders.

Congress should consider reassessing and determining the (1) level of postal services the nation requires, (2) extent to which USPS should be financially self-sustaining, and (3) appropriate institutional structure for USPS. Both USPS and the Postal Regulatory Commission (PRC) generally concurred with the matters.