Coast Guard icebreakers can ensure year-round access to the Arctic—critical to protecting U.S. economic and national security interests in the region.

We testified on the Coast Guard’s Arctic strategy and capabilities, including icebreaking. The Coast Guard’s only operating heavy polar icebreaker is near the end of its service life. The plan is to replace it with 3 Polar Security Cutters. We’ve made a number of recommendations on this cutter acquisition.

For example, the new cutters’ planned delivery dates were based on the old icebreaker’s service life—not on the time it takes to build ships. We recommended developing a more realistic schedule. 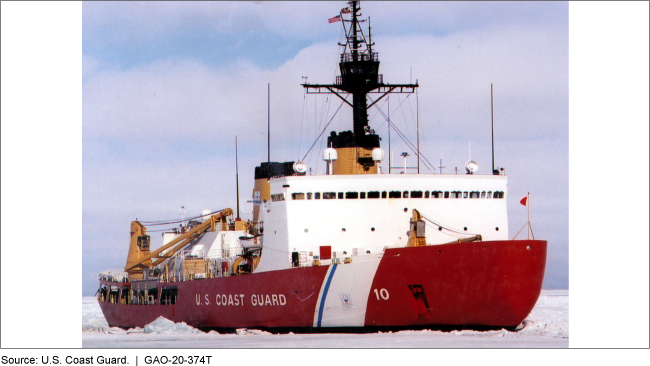 In fiscal year 2012, the Coast Guard—the primary federal maritime agency in the Arctic—assessed its capability to perform its missions in the region and identified a number of capability gaps. These gaps, which still exist today, include communications, infrastructure, maritime domain awareness, and icebreaking. The Coast Guard has worked to mitigate these gaps with its Arctic partners, such as other federal agencies. For example, during a 2015 annual operation in the Arctic, the Coast Guard took steps to enhance maritime domain awareness by testing the Department of Defense's communications equipment, extending communications capabilities further north than previously possible. However, in June 2016, GAO found that the Coast Guard did not systematically assess the extent to which its actions helped to mitigate these gaps. In response to GAO's recommendation, the Coast Guard is currently developing an implementation plan and corresponding metrics for its April 2019 Arctic Strategy.

In September 2018, GAO found that the Coast Guard faced four key risks when it established the Polar Security Cutter program in March 2018: technology, design, cost, and schedule. For example, the Coast Guard's initial planned delivery dates of 2023, 2025, and 2026 for the three ships were not informed by a realistic assessment of shipbuilding activities. The schedule was driven, instead, by the potential gap in icebreaking capabilities once the Coast Guard's only operating heavy polar icebreaker—the Polar Star —reaches the end of its service life (see figure).

GAO recommended in September 2018 that the program develop a realistic schedule and determine schedule risks for the program. In response, the Coast Guard is now tracking additional schedule risks for the program and is in the process of updating its program schedule. GAO will continue to monitor the Coast Guard's progress in addressing this recommendation and other recommendations GAO made to address key risks, such as design and cost, facing the Polar Security Cutter program.

The Coast Guard—a component of the Department of Homeland Security (DHS)—is a multimission, maritime military service that is responsible for maritime safety and national security, among other missions. Given the Arctic region's expansive maritime domain, the Coast Guard plays a significant role in Arctic policy implementation and enforcement. The Coast Guard is also the sole provider and operator of the U.S. polar icebreaking fleet—a critical component in ensuring year-round access to the Arctic. The Coast Guard is developing the first of three heavy polar icebreakers—the Polar Security Cutter—it has acquired in over 40 years.

This statement addresses (1) the Coast Guard's assessment of capability gaps in the region, and (2) key risks facing the Polar Security Cutter acquisition. This statement is primarily based on GAO's June 2016 report examining capability gaps in the Arctic and its September 2018 report examining the Coast Guard's polar icebreaker acquisition.

In June 2016, GAO recommended, among other things, that Coast Guard develop measures for assessing how its actions have helped to mitigate Arctic capability gaps. In September 2018, GAO recommended that the Polar Security Cutter program develop a program schedule according to best practices. DHS concurred with all of the recommendations, and the Coast Guard is in the process of addressing them.