Microelectronics used in nuclear weapons must function in environments with extremely high radiation levels. The National Nuclear Security Administration’s only source for producing these specialized microelectronics are aging facilities at Sandia National Labs.

NNSA is starting a $1 billion, 20-year effort to upgrade and sustain Sandia’s existing facilities and nuclear capabilities. NNSA has appointed a coordinator to lead this effort, but hasn’t fully developed a thorough set of controls for managing the cost, schedule, and associated risk. We recommended they develop such plans to effectively carry out planned microelectronics activities.

Microelectronics next to a U.S. dime 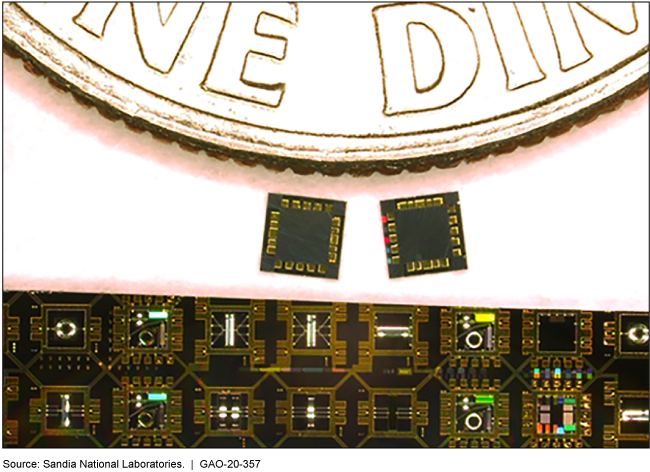 Tiny black shapes next to the edge of a dime

Over the past decade, the Department of Energy's (DOE) National Nuclear Security Administration (NNSA) completed several actions to sustain the condition of its existing microelectronics facilities at Sandia National Laboratories (Sandia), which are NNSA's only source for producing strategic radiation- hardened microelectronics that can operate in environments with extreme exposure to radiation. In particular, during fiscal years 2012 through 2019, NNSA carried out a multiyear, $150-million effort at Sandia to replace or refurbish infrastructure and equipment in its primary microelectronics production facility to ensure continued operations through 2025. While NNSA was working with Sandia to sustain current facilities, the agency also began identifying and evaluating options for producing microelectronics after 2025, including constructing a new multi-billion dollar production facility at Sandia. However, because of changes to key assumptions, including longer-term viability of existing facilities, NNSA decided in November 2018 not to pursue any of the identified alternatives and instead stated that the agency was going to assess options to sustain its current capability at Sandia.

NNSA's ongoing approach to managing its strategic radiation-hardened microelectronics activities includes two key efforts. First, the agency decided in October 2019 to invest about $1 billion over the next 20 years to upgrade and sustain its microelectronics capability at Sandia through 2040. Specifically, NNSA plans to upgrade its production process as well as complete identified infrastructure (such as electrical distribution) and equipment projects. Second, in November 2019 NNSA created and filled a new full-time microelectronics coordinator position that, among other things, will have responsibility for certain aspects of the agency's microelectronics activities, according to agency officials. However, NNSA's approach does not fully incorporate key management controls that NNSA applies to other important activities. For example, DOE and NNSA require their programs and projects to establish an overarching management plan that describes the procedures to define, execute, and monitor a program or project as well as establishing specific requirements in a variety of areas such as cost estimating and performance management. NNSA has not established a similar management plan to oversee and coordinate its microelectronics activities. By incorporating these key management controls, NNSA would have increased assurance that its planned microelectronics activities are clearly defined, efficiently executed, and effectively monitored.

GAO recommends that NNSA incorporate additional management controls, such as developing an overarching management plan, to better oversee and coordinate its microelectronics activities. NNSA neither agreed nor disagreed with this recommendation.