The U.S. Postal Service has over 31,000 retail facilities—a network reaching into almost every community in the nation. As demand for some mail products has declined, USPS has been unable to cover its costs as it is required to do—putting it on our High Risk list.

A task force and others have suggested allowing USPS to offer additional services at its facilities, such as hunting licenses, to generate revenue and other benefits.

We asked postmasters and industry and consumer representatives about potential services. They said that some—like banking—could expand consumer access. But adding services may require additional expertise or resources. 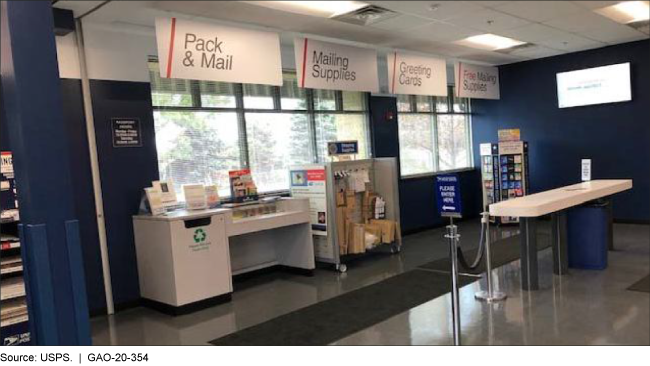 In 2018, U.S. Postal Service's (USPS) retail facilities, such as post offices, generated about $10.5 billion in revenue and cost approximately $5 billion to operate, making them profitable overall. While such facilities accounted for about 15 percent of USPS's total fiscal year 2018 revenues, and about 7 percent of its total costs, stakeholders identified other benefits that retail facilities provide for communities—particularly in rural areas—such as local access to government information and services.

Offering additional nonpostal products and services at USPS retail facilities could provide consumer, government, or community benefits, but viability may be limited. Stakeholders said new offerings, such as expanded financial products or government services could, for example, enhance consumers' access and government efficiencies. In particular, some noted that USPS could provide a viable banking alternative for those lacking banking services. However, USPS officials, postmasters GAO surveyed, and stakeholders GAO interviewed said that additional offerings may generate minimal revenue and that USPS may face factors limiting the viability of these offerings. For example, groups representing states' licensing agencies said offering state hunting and fishing licenses could be problematic given different state requirements. Also, stakeholders said USPS may not have the expertise nor the required capital to enter the market of some of these new offerings. Given such concerns, USPS and policy makers need to carefully weigh costs, benefits, and limitations of any new offerings.

USPS manages over 31,000 retail facilities, which help it provide postal services throughout the country. However, USPS faces financial challenges. In general, USPS is prohibited by statute from providing nonpostal products and services (i.e., services not directly related to mail delivery) unless approved by the Postal Regulatory Commission. But given the ubiquity of the retail network, some stakeholders have suggested that offering additional nonpostal products and services could help USPS generate revenue and provide benefits for consumers and communities.

GAO is making no recommendations. USPS, in its comments, reiterated that it faces various constraints to new offerings at retail facilities.