The 2 main contract types that DOD uses to acquire its major weapon systems are:

Fixed-price-type contracts—DOD pays a fixed price, at which the contractor must deliver the item or service

We analyzed 21 weapon acquisition programs and found that the type of contract DOD used didn’t affect how well programs stuck to cost or schedule estimates.

DOD used to centrally review acquisitions and share what it learned about contract types. Now, the military departments do the reviews; we recommended requiring them to share their findings.

A Component of the Patriot Missile Defense System 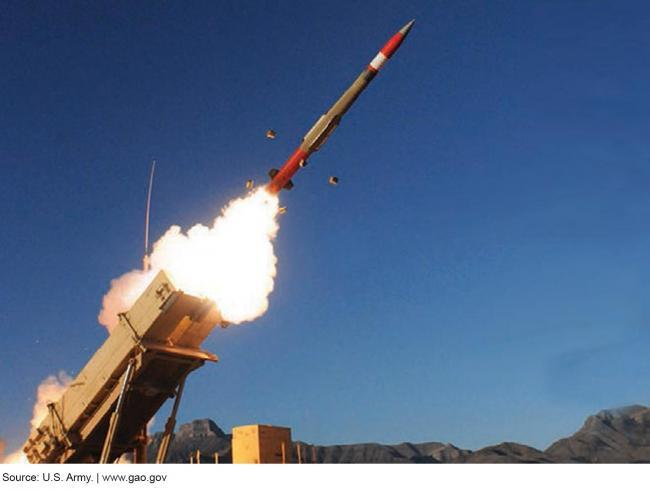 To acquire new major weapon systems, such as aircraft, ships, and satellites, the Department of Defense (DOD) uses a variety of contract types including cost-type contracts, under which the government assumes more risk. DOD is required to document its risk assessment in choosing contract types for major programs. Risks assessed can include use of new technologies and stability of system costs and requirements. Once awarded, cost-type contracts have additional reporting requirements to help monitoring of cost and schedule performance.

GAO analyzed program cost and schedule outcomes for 21 major acquisition programs, and did not find a clear relationship between these outcomes and contract types used. However, programs that completed certain knowledge-based acquisition practices generally had better cost and schedule outcomes than programs that did not implement those practices. These practices include completing preliminary design review before the start of system development and releasing at least 90 percent of design drawings by critical design review.

From fiscal years 2011 through 2019, DOD used cost-type contracts for a small proportion—under one-fifth on average—of obligations for its major acquisition programs. This proportion varied across the military departments (see figure).

A change to DOD's peer review process for its largest contract awards reduced a means for sharing best practices and lessons learned about contract choice across the military departments. In 2019, the Office of the Secretary of Defense announced the end of its peer reviews for most competitive procurements above $1 billion. While these contracts will instead be reviewed through the military departments' own processes, DOD currently does not require the departments to collect and share their findings. DOD has an online compendium of peer review findings; however, this was last updated in 2013. Using an existing centralized resource such as the compendium could help contracting officials learn from the experiences of peers across DOD by exposing them to good practices for structuring contracts.

When acquiring major weapon systems, DOD can choose between several different contract types. One of these is cost-type, under which DOD pays allowable costs incurred by the contractor. Historically, DOD has struggled to manage its major acquisition programs. The result has been billions in cost growth and schedule delays in providing systems to the warfighter.

GAO recommends that DOD establish procedures requiring the military departments to collect and share findings from their reviews of contracting approaches, such as by updating the existing online compendium. DOD agreed with GAO's recommendation.