Veterans coping with the stresses of deployment or with readjusting to civilian life are at particular risk for drug and alcohol addiction. The VA pays for addiction treatment. We looked at these treatment services and veterans’ access to them. 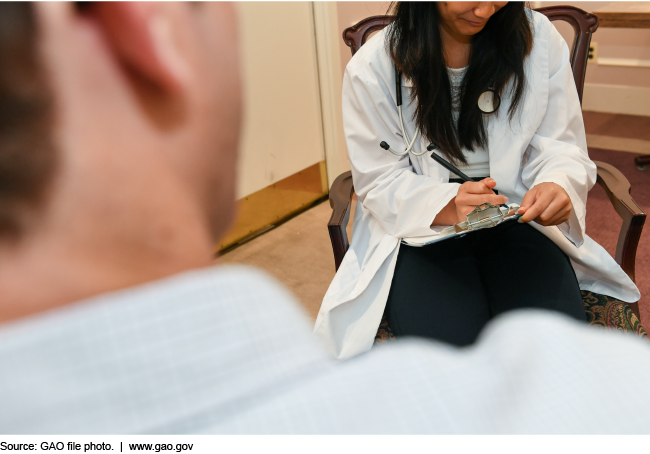 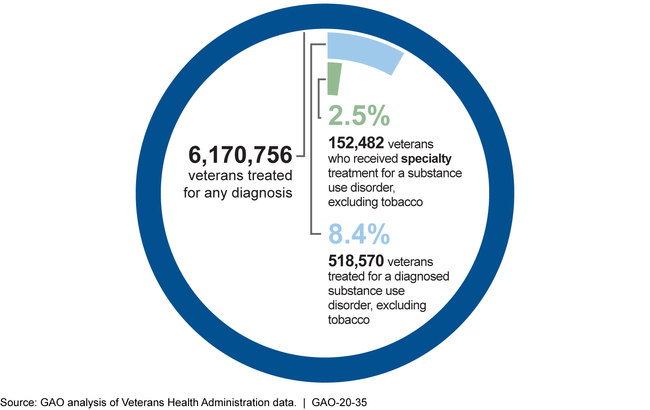 Note: Specialty SUD services are those provided through a clinic or program dedicated to substance use disorder treatment. SUD services include services provided by any type of provider.

VA data show that overall there was little difference in the percentage of veterans using SUD services, including specialty services, in rural and urban areas in fiscal year 2018. However, there were differences for some specific services. For example, in rural areas, 27 percent of veterans with an opioid use disorder received medication-assisted treatment—an approach that combines behavioral therapy and the use of medications—compared to 34 percent in urban areas. In providing SUD services in rural areas, VA faces issues similar to those faced by the general population, including lack of transportation. The agency is taking steps to address these issues, such as using local service organizations to transport veterans for treatment.

Substance use and illicit drug use are a growing problem in the United States. SUDs occur when the recurrent use of alcohol or drugs causes significant impairment, such as health problems. The veteran population has been particularly at risk. Veterans are 1.5 times more likely to die from opioid overdose than the general population, according to VA and Centers for Disease Control and Prevention data. Furthermore, veterans live in rural areas at a higher rate than the general population, which may affect their ability to access SUD services. VA is the largest integrated health care system in the United States, providing care to about 6.2 million veterans. VA provides SUD services through outpatient, inpatient, and residential care settings and offers various treatment options, including individual and group therapy, medication-assisted treatment, and naloxone kits to reverse overdoses.

Senate Report 115-130 included a provision for GAO to study VA's capabilities to treat veterans with SUDs. This report describes (1) trends in the number of and expenditures for veterans receiving SUD services, including specialty SUD services; and (2) any differences between veterans' use of SUD services in rural and urban areas, and the issues affecting access to those services in rural areas. GAO reviewed VA policies and data from fiscal years 2014 through 2018. GAO also interviewed officials from six VA health care systems, selected for their high percentage of veterans with an opioid use disorder and to achieve variation in geography and locations VA has designated as urban and rural.